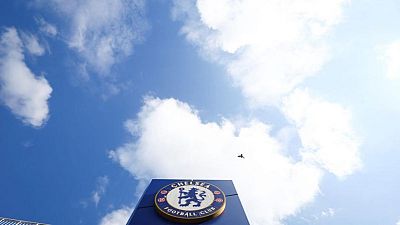 LONDON – Anyone interested in buying Chelsea Football Club can make a proposal to the government, Britain said on Friday, after ministers sanctioned owner Roman Abramovich and halted his planned sale of the Premier League side.

The British government, which has been under pressure to ramp up sanctions on Russian oligarchs after Moscow’s invasion of Ukraine last month, imposed a travel ban and froze Abramovich’s assets on Thursday.

The announcement brought to a halt his recently announced plans to sell the London club, which he had expected to fetch more than three billion pounds ($3.9 billion).

The club is now effectively controlled by the government and permitted to operate under strict conditions which prevent transfer deals and new ticket sales and even forced the club merchandise store to close.

“As the licence conditions are written today, the sale would not be allowed,” Britain’s technology minister Chris Philp told Sky News.

“However, if a buyer emerged it would be open to that buyer or to that football club to approach the government and ask for the conditions to be varied in a way that allows that sale to take place.”

British property developer Nick Candy remains interested in making a bid, a spokesperson said in a statement, and was examining the details of Thursday’s sanctions announcement.

Chelsea said on Thursday it would seek changes to the licence under which it must now operate to allow the club to continue as normal as possible. The government has said that while Abramovich cannot benefit financially from the club, some changes might be possible.

“We’re in constant contact with the club…It’s now up to the club to apply for any amended licence,” Prime Minister Boris Johnson’s spokesman said.

“Chelsea have said that they will do that, and we’ll obviously work with the club and… the league to consider any operationally necessary changes.”

The Times newspaper cited unnamed sources at the club as saying the club was facing severe financial difficulty because of the restrictions the government had imposed.

“The licence allows the club to continue with day-to-day activities but the banks don’t have the risk appetite for it,” a source told the paper. “They’ve frozen some of the corporate credit cards. It’s put a lot more pressure on the club.”

While Chelsea’s main shirt sponsor, mobile network Three, has suspended ties, another sponsor, Trivago, said would stick with the club.

“The uncertainty over the current ownership situation of Chelsea FC has been challenging. Moving forward, it is important to us to continue supporting the club,” the internet hotel search firm said in a statement.

“We are looking forward to a transition of ownership as soon as possible and want to support the club in this process.”

Three said on Thursday it had asked the club to remove its logo and was suspending its relationship, while shirt sleeve sponsor Hyundai Motor said it was considering its next move.

Thomas Tuchel, the Chelsea team manager, said players could “wear a message for peace” on the team shirts instead.

“It can never be the wrong message,” he said. “Maybe the worry is to find enough shirts to play in with the sanctions. But as long as we have enough shirts and the bus is full of fuel, we will arrive and be competitive.”

He said he trusted the British government to find a solution to the impact of the sanctions by the end of the season.

Separately, London-listed Russian steelmaker Evraz, in which Abramovich is the largest shareholder with a 28.6% stake according to Refinitiv Eikon, said on Friday that 10 of its 11 board members had quit.