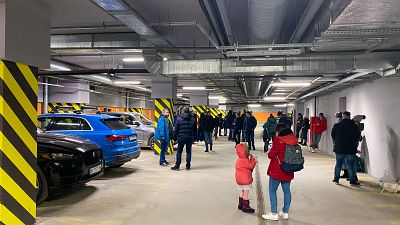 From rescue missions aiding Ukrainians to escape war-torn cities to offering translation services once they cross borders and helping them to start new lives and find jobs in Europe, Ukraine’s tech industry is banding together to save and support the victims of Russia’s invasion.

Ukrainian software company N-iX had already made contingency plans to evacuate its 300 staff in Kyiv and 150 others in eastern Ukraine before Russia’s latest invasion on February 24. As such, it loaded much of its staff onto buses to Lviv near the border with Poland.

N-iX’s staff volunteered to drive buses full of people from the hard-hit cities of Kyiv and Kharkiv to the relative safety of western Ukraine.

“I really am impressed with these heroes who were driving those buses through those conflict zones,” N-iX Chief Operating Officer Pavlo Deshchynskyy told Euronews Next.

The buses carried about 30 people and were used for N-iX’s staff and their relatives.

The company also shared this resource with 80 other companies in Ukraine to help transport their employees while the vehicles were also used to ferry women with children to Poland.

Not all of the company’s staff evacuated; around 20 of its IT specialists have temporarily left their jobs to fight for the Ukrainian military.

The company has also been making donations to Ukraine's army, such as body armour and cars, and is helping fund various aid agencies operating in Ukraine.

We (the IT industry) own this third place in the world and we can still generate this GDP… We can still keep people busy and pay salaries.

“No one believes that it can happen. But we were following the news and Biden's speech and we were preparing just to be on the safe side,” Deshchynskyy said from a cubicle in N-iX’s Lviv office, which was turned into a temporary makeshift bedroom for the rescued staff.

“I’m just trying to keep a sense of normality by being in the office,” he said.

Deshchynskyy, like many from the company based in Lviv, has given up his home to accommodate the Kyiv staff and has moved in with other relatives.

Part of the contingency plans also included finding apartments and hotels to accommodate the reduced staff.

The company also turned its underground parking in Lviv into a shelter, which has been used when the sirens go off.

N-iX has been providing software development services since 2002 and also has offices in Poland, Sweden, Bulgaria, and the United States.

The Russian invasion is estimated to have destroyed about $100 billion (€91 billion) in roads, bridges and businesses in Ukraine.

About 50 per cent of the country’s businesses are not operating and those that are, are not working at full capacity, Oleg Ustenko, chief economic advisor to Ukrainian President Volodymyr Zelenskyy, said on Thursday.

Deshchynskyy said N-iX is operating at about 90 per cent capacity as the fighting in Ukraine puts a spotlight on its flourishing IT sector, which contributed almost 5 per cent to Ukraine’s GDP last year.

“Our company is operating and I believe this is one of the ways for people to escape from this news stream and to do something meaningful,” he said.

Steel and manufacturing are the other top two industries that contribute to Ukraine’s GDP.

“We (the IT industry) own this third place in the world and we can still generate this GDP… We can still keep people busy and pay salaries they can support not only their families but can also donate to some humanitarian needs,” Deshchynskyy said.

Keeping people in employment is another way in which tech companies are helping.

In Germany, two Berlin-based Ukrainian entrepreneurs have launched a job platform for those displaced from and within Ukraine.

UA Talents allow companies from all over Europe to advertise their job openings to people from Ukraine who have lost their employment due to the war.

Ukrainians are passionate and hard-working people. We want to show how talented and determined UA workers are.

It already has the support of the tech community, including Meta, Bolt and StepStone, and has around 5,000 jobs advertised.

“We all have families in Ukraine and are devastated by what is happening to our beautiful country right now,” UA Talent co-founder Ivan Kychatyi told Euronews Next.

The reaction to the platform since it launched on March 7 has been “overwhelming,” he said.

For the moment the jobs posted are all tech-related but UA Talents will soon incorporate other industries.

“The tech industry is a large part of the Ukrainian economy, with a high level of knowledge and experience of the people employed in this sector,” Kychatyi said.

“Ukrainians are passionate and hard-working people. We want to show how talented and determined UA workers are. They will contribute their passion to your business challenges in the tech sector and beyond”.

As well as posting jobs, the website also allows for employers to be able to provide additional financial support to aid their non-profit initiative, which grants proceeds to Ukrainian projects.

Technology is also helping those who have fled Ukraine and find themselves in countries where they do not speak the local language.

Translit, a translation services company based in Ireland, has built the technology that performs fast translations of documents or audio but it is still human-generated for better accuracy.

“We wanted to help individuals who are fleeing to countries and they're struggling with language services and there's no one there to help them,” the company’s CEO Alex Chernenko, who is from Ukraine, told Euronews Next.

“They can come to us and we will do our best to support them. And obviously, we are offering what we are actually doing, which is translation, interpreting, personal documents, medical records etc”.

He said the company recently helped a woman undergoing urgent heart surgery who had travelled from Ukraine to Ireland, and so needed her medical records to be translated quickly.

Chernenko said the company is offering its services to aid agencies as well as individuals.

“Technology is supposed to be making life easier for people,” he said.

“If somebody is based in the remote location and they don't understand what's happening, they just could pick up the telephone or internet tablet and they could tap into an internet-based phone and essentially have the interpretation on that line and help them to communicate”.

Is this what astronauts will use to build colonies on the Moon?