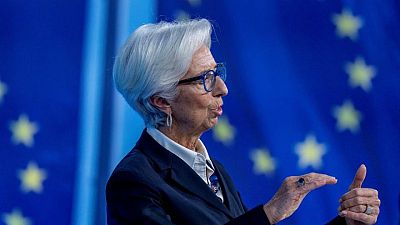 FRANKFURT – The European Central Bank has no intention of raising interest rates until some time after it has ended its bond buying at the end of the third quarter, ECB President Christine Lagarde said on Thursday.

“Any adjustment to the key ECB interest rates will take place some time after the end of our net purchases under the APP (Asset Purchase Programme) and will be gradual,” Lagarde told a news conference.

“The path for the key ECB interest rates continues to be determined by the Governing Council’s forward guidance and by its strategic commitment to stabilise inflation at 2% over the medium term.”

The bank said on Thursday it plans to end asset purchases in the third quarter, accelerating its exit from extraordinary stimulus in a surprise move, as soaring inflation outweighs concerns around Russia’s shock invasion of Ukraine.

Markets are now pricing in around 43 basis points’ worth of interest rate hikes this year, up from around 30 basis points predicted before the meeting.

On Wednesday, money markets had been pricing in a 30 basis point increase to the ECB‘s deposit rate by December, taking it to minus 0.2% from the current minus 0.5%.

Investors have scaled back their bets on rate hikes since Russia began its invasion of Ukraine on Feb. 24. The conflict on the euro zone’s eastern border is expected to slow growth and make the ECB more cautious about tightening its policy.

“The Governing Council expects the key ECB rates to remain at their present level until it sees inflation reaching 2% well ahead of the end of its projection horizon – and durably for the rest of the projection horizon,” Lagarde said.

The ECB president had effectively opened the door to rate hikes at a Feb. 2 news conference by refusing to repeat her long-held view that such a move was “very unlikely” this year.

The ECB pushed its deposit rate below zero in 2014, one of several aggressive measures taken to revive what was then sluggish price growth in the 19-country euro zone.

The negative rate means banks are effectively charged for parking their idle cash at the ECB.