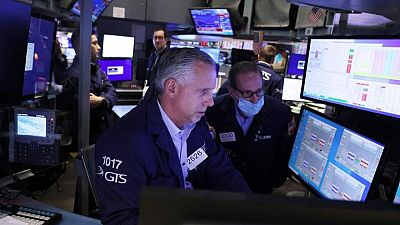 NEWYORK – Global stock markets rallied in Europe and North America on Wednesday after three straight days of selling, and oil prices retreated from the peaks scaled over the last week as investors digested the news of Russian oil import bans.

Moscow accused the United States on Wednesday of declaring an economic war on Russia, and said it was considering a response to the U.S. ban on Russian oil and energy imports.

Western sanctions have cut Russia off from global trade and financial markets.

Analysts considered the rebound to be a technical correction, rather than any reflection of a change in sentiment about the conflict, which is Europe’s biggest war since World War Two.

“For now, markets are relieved by the fact we haven’t had any fresh bearish news since yesterday’s announcement of a ban in oil imports from Russia,” said Fawad Razaqzada, market analyst at Think Markets.

“The markets were severely oversold… this is also typical of a bear market when you sometimes see multiple percentage point gains in a short period of time as the shorts are squeezed, before the rally runs out of steam and the downward trend resumes.”

European companies are suffering more strain on supply chains caused by the war, with German carmakers Porsche, Volkswagen and BMW all curtailing output because of a lack of supplies.

The London Metal Exchange halted nickel trading on Tuesday after prices rocketed to over $100,000 a tonne on concern that Russian supplies will be interrupted. The LME said it does not expect to resume trading before Friday.

A World Bank official said high oil prices prompted by Russia’s invasion could cut a full percentage point off the growth of big developing economies such as China, Indonesia, South Africa and Turkey.

“War is inflationary and this war in particular is very inflationary… not just in terms of energy, oil and gas, but it’s inflationary across the commodities complex,” said Dan Scott, chief investment officer at Vontobel.

“Grain prices don’t react to central bank policy, and nor do necessarily nickel prices… hiking interest rates is not going to have a direct impact.”

The European Central Bank meets on Thursday, but given the threat of stagflation – when prices soar and growth slows – economists expect rate hikes will be put off until later this year.

The euro rose on reports that European Union countries were discussing joint bond issuance to finance energy and defenee spending. The euro up 1.65% to $1.1079, while the dollar index fell 1.204%.

Elsewhere, bitcoin surged 9% to $42,260 after Biden signed an executive order requiring government agencies to assess the benefits and risks of creating a central bank digital dollar.