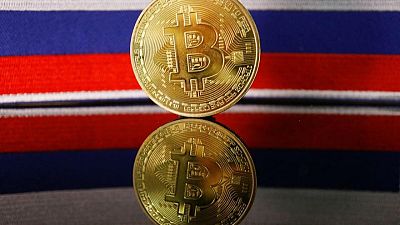 LONDON – Major cryptocurrency exchanges staying put in Russia after its invasion of Ukraine will suffer a public backlash against their business around the world, a Ukrainian government official said on Tuesday, urging the companies to change course.

Binance, the world’s biggest exchange, and U.S.-based Coinbase Global Inc and Kraken have said they would remain in Russia, rejecting calls by Ukraine for a blanket ban on users in the country.

“Private business decides for themselves where they stand, which values they support and how it’s going to benefit them,” Alex Bornyakov, Ukraine’s deputy minister of digital transformation, said in an interview with Reuters.

“Even those who decided to stay – society eventually is going to ban their products because we see this enormous support from the citizens, from the people of the world.”

The West has hit Russia with sanctions of unprecedented severity over its military assault on Ukraine, the biggest in Europe since World War Two. The corporate response has varied, with some firms taking measures required by law and others taking voluntary steps.

The anonymity offered by crypto has raised fears among regulators that such tech could be used to bust sanctions.

Germany said on Tuesday expanded sanctions on Moscow should rule out the use of crypto to circumvent the measures. Estonia also called for curbs on crypto to close sanctions loopholes.

The U.S. Treasury said on Monday large-scale sanctions evasion using crypto was “not necessarily practicable,” calling for vigilance from companies.

PayPal, Visa, Mastercard and other traditional payment firms suspended services in Russia. Ukraine’s vice prime minister had called on them and crypto firms, as well as other companies, to cut ties with Russia.

Yet the crypto exchanges have not acquiesced to calls for a blanket ban on Russian users, a decision experts said weakens attempts to isolate Moscow.

The companies have said they comply with all rules and have used tools to trace and prevent attempts to bust sanctions. Some crypto exchanges have said that companies should not unilaterally withdraw services as a reason for staying in Russia.

“They can stay, but the publicity of their actions will be very bad,” Bornyakov said of the exchanges, adding that Kyiv did not see the use of crypto for sanctions busting as an imminent threat. “I believe they are going to change their mind.”