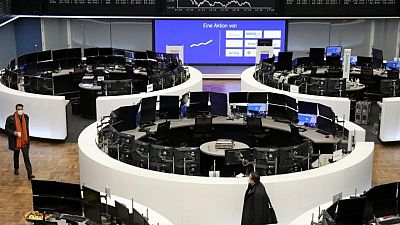 – European stocks ended off session lows on Monday, helped by a 4.3% rally in energy stocks as oil prices rose above $130 a barrel, but inflation fears amid the Russia-Ukraine conflict saw German and Italian shares confirm a bear market.

London’s commodity-heavy FTSE 100 lost the least, down 0.4% with oil majors BP Plc and Shell jumping 3.8% and 8%, respectively, as the U.S. and Western allies weigh a ban on importing Russian oil over its invasion of Ukraine which Moscow calls a “special operation”. [O/R]

“Germany is one of those European economies who is going to get a severe hit if the allies and the U.S. impose sanctions on Russian oil,” said Ipek Ozkardeskaya, senior analyst at Swissquote.

“We are already at skyrocketing inflation… We could see a situation where we have a high inflation and high unemployment and a weakened global growth. A stagflation is, unfortunately, a very highly likely scenario.”

The pan-European STOXX 600 index cut losses of around 3% to close at a near one-year low, down 1.1%. Banking and auto stocks led declines.

The German DAX and Italy’s MIB have shed more than 20% from their record closing highs on Jan. 5, confirming bear market levels. The indexes were down 2.0% and 1.4% respectively for the day.

“We were expecting European stocks to outperform their U.S. peers (this year). But, right now, with the war at Germany’s doorstep, it’s not going to be the case anymore.”

The euro-zone bank index tumbled 4.1% to a 13-month low ahead of a European Central Bank meeting later this week, with mixed views about how the central bank will respond to the potential economic impact of the Ukraine conflict.

Shares in UniCredit, Raiffeisen and Societe Generale, among banks exposed to Russia, all fell between 4.2% and 5.7%.

Russia supplies accounted for 17% of global natural gas consumption, 40% of Western European consumption as of 2021, according to a Goldman Sachs note.