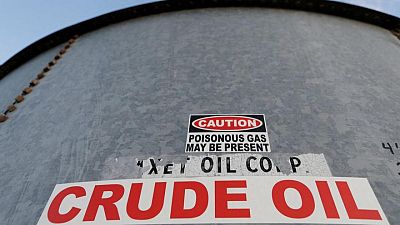 – A rally that has driven oil prices to their highest in almost a decade shows no signs of abating, as supplies from top exporter Russia are disrupted by sanctions after its invasion of Ukraine, a Reuters poll showed on Friday.

A survey of 35 economists and analysts forecast Brent crude would average around $91.15 a barrel this year, a jump from January’s $79.16 consensus and the highest 2022 estimate in all the Reuters surveys.

Among the most bullish predictions, JP Morgan expects $185 oil by the end of 2022 if disruption to Russian exports lasts that long, although its average for the year was $98.

The highest average predictions for 2022 were Rabobank and Raiffeisen with $111.43 and $110 respectively.

“The risk premium is going through the roof,” said Christian Reuter, NORD Landbk’s senior director of sector strategy, with the Organization of the Petroleum Exporting Countries and allies also unable to adequately compensate the shortfall.

Benchmark Brent crude broke above the $100 last week for the first time since 2014 and hit $119.84 on Thursday. It was trading above $112 on Friday, propped up by sanctions on Russia, which ships more than 7 million barrels per day (bpd).

Although the oil and gas trade is not directly targeted, customers have hesitated to buy Russian crude to avoid becoming entangled in sanctions. [O/R]

“Prices could spike to $150 a barrel and even higher if the U.S. and allies take even more aggressive steps to reduce oil exports from Russia, as there is not sufficient spare capacity to offset a significant reduction in Russian exports,” said John Paisie, president of Stratas Advisors.

An estimated 8% of global supply has been disrupted in recent days. The shortfall may not be offset by the International Energy Agency’s decision to release 60 million barrels from emergency reserves or a likely return of Iranian supply, analysts said.

The IEA release represented a “one-month offset to a potential disruption to one-third of Russia’s 6 million barrel per day seaborne oil export flows,” Goldman Sachs said, adding a short-term de-escalation or a faster ramp up in OPEC+ output would not derail its view for structurally higher prices.nFWN2V417Q]

DBS Bank lead energy analyst Suvro Sarkar said there could be “some normalisation in the second half of 2022, but maybe not to pre-conflict levels.”

From an average forecast of $94.66 a barrel in the first quarter, Brent prices would rise to $97.07, before easing slightly to an average $87.08 in the last quarter and a relatively subdued $82.94 consensus next year, the poll showed.

“The biggest downside risk stems from an economic slowdown that is the result of unintended consequences stemming from the sanctions and elevated energy prices — coupled with a global economy that is still dealing with supply chain issues,” Paisie from Stratas said.