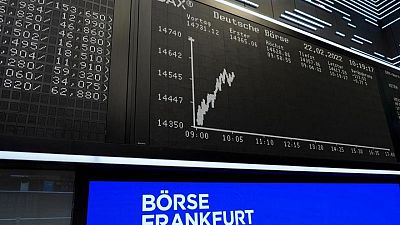 -European stocks sank to near one-year lows on Friday, as auto and bank stocks took a battering on reports of a nuclear power plant on fire amid fierce fighting between Ukraine and Russian troops.

It has lost more than 6% since Russia launched its invasion of Ukraine last week with Europe’s dependence on Russia for energy as well as its proximity to the conflict hitting it more than other parts of the globe. Asia has lost more than 4% since then, while Wall Street indexes have made up losses with the S&P 500 up close to 2%.

There was global alarm when Russian forces seized the largest nuclear power plant in Europe after a building at the complex in Ukraine was set ablaze.

“The possibility that there could be a nuclear disaster, was almost incomprehensible, and this sort of brings it home,” said Danni Hewson, financial analyst at AJ Bell.

“The fallout is going to be with companies and investors for years to come.”

Safe-haven gold and bond prices jumped as investor nerves ran high, with a measure of volatility in euro zone stocks hitting 45 points for the first time since June 2020.

The auto-heavy German DAX closed down 4.4% to over one-year lows as carmakers tumbled 5.6%, to be among the worst performers this week among European sectors.

“No one buys a new car when commodity prices are going through the roof,” said Michael Hewson, chief market analyst at CMC Markets. “Their sales and margins are going to be significantly lower. Consumer disposable income is going to take a significant hit because of higher food and gas prices.”

Dutch bank ING dropped 9.7% after it said that about 700 million euros ($771 million) in outstanding loans were affected by “new sanctions on (Russian) specific entities and individuals”.

Michelin dropped 7.2% after the French tyre maker said it would temporarily halt production at some of its plants in Europe due to logistical issues.