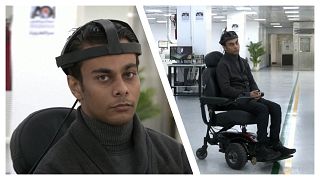 Abdelrahman Omran turns his head right, left, up down - and without lifting his hands, the brain-wave operated wheelchair that he designed - and sits in - moves in that direction.

The young Egyptian scientific researcher had personal reasons for building the device.

Born with a condition that impacted his motor skills, the 24-year-old was unable to walk until the age of five, and only then after several surgeries and rounds of rehabilitation.

"I thought about all the people [for] whom I felt a very small part of the suffering they experience, people not able to move because they are paralysed, not able to move their hands or legs," Omran explained.

"So from here, the idea of how to help them came about," he said.

Omran has been working on the project since 2015 and its commercial prospects were given a boost when it was taken up by the Arab Organisation for Industrialisation.

The organisation will help Omran develop and prepare the device for mass production.

For his part, Omran puts his success down to the luck of having a supportive family who encouraged him. He says he hopes to be an example to others with disabilities.

"The advice I want to give to those with special abilities (…) in fact, I want to give it to their families - they sure have dreams and as long as their parents believe in them and their abilities, they can achieve the best," he said.

“They can be poets, writers, artists, but it falls on the parents [to nurture this]".