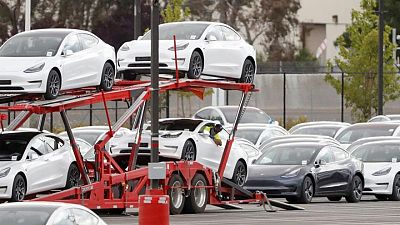 The announcement comes as the billionaire entrepreneur criticized the Biden administration and Democrats for a proposal to give union-made, U.S.-built electric vehicles an additional $4,500 tax incentive. Tesla and foreign automakers do not have unions at their U.S. factories.

Organizing a Tesla plant would be a major victory for the UAW, which has largely failed to win the backing of workers at foreign-owned automakers’ or EV startups’ assembly plants, many of which are in the U.S. South. Tesla also has a plant in Austin, Texas.

In his tweet on Thursday, Musk said the real challenge was the negative unemployment in Bay Area, and not compensating people well would make them leave as they have many offers.

“I’d like hereby to invite UAW to hold a union vote at their convenience. Tesla will do nothing to stop them,” he said https://bit.ly/3sykkNr.

UAW did not have an immediate comment about Musk’s tweet, but analysts said his actions over the past year do not match the rhetoric.

Musk has also faced the ire of U.S. National Labor Relations Board, which last year ruled the company violated U.S. labor law and ordered Tesla to direct him to delete a 2018 tweet saying employees would lose their stock options if they formed a union.

Tesla subsequently appealed the NLRB ruling with the New Orleans-based U.S. Court of Appeals and that case is still pending.

Tesla has been also hit by a string of lawsuits on racial discrimination and sexual harassment by current and former workers. A California civil rights agency also filed a lawsuit accusing Tesla of failing for years to address widespread racist conduct at its Fremont assembly plant.

Tesla has said it does not tolerate discrimination and has taken steps to address complaints by workers.

U.S. President Joe Biden has often praised the electric-vehicle (EV) efforts made by Detroit automakers General Motors Co and Ford Motor Co, including during his State of the Union Speech on Tuesday, even though they sell fewer EVs than Tesla.

The latest tweet could help Musk improve his image with the administration and workers, Harley Shaiken, labor professor emeritus at University of California Berkeley, said.

But he and other experts doubted whether Musk would stay neutral even if a union vote is happening.

“He has a history of being quite anti-union. I personally don’t take him at face value on this,” Jeffrey Hirsch, labor & employment law professor at University of North Carolina, said.

Under federal law, at least 30% of workers at a plant or company must sign a petition showing they want to join a union for an election to be held. Typically, unions like the UAW will not seek an election unless they feel they have the necessary support to win the majority backing necessary.

Experts say UAW could get a majority of workers to sign cards saying they want to be represented by the union and call on Musk to recognize a union without an election.

Last November, 10 environmental and advocacy groups, including Sierra Club, Greenpeace and League of Conservation Voters, called on EV startup Rivian Automotive to work with labor groups to ensure a clean future and high-paying jobs, and to allow a union voting process in its plants.

Rivian could not immediately be reached on Thursday.