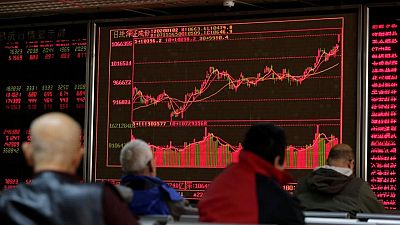 By Herbert Lash and Huw Jones

NEWYORK/LONDON – Data showing a red-hot U.S. jobs market sent Treasury yields lower and strengthened the dollar on Friday, but the war in Ukraine overshadowed the blowout report as the euro plunged on expectations of slower European economic growth.

U.S. job growth surged in February, pushing the unemployment rate down to a two-year low of 3.8% and employment just 2.1 million jobs below pre-pandemic levels.

The euro tumbled below $1.10 for the first time in almost two years and hit a fresh seven-year low against the Swiss franc as Russian forces seized the largest nuclear power plant in Europe after a building at the complex was set ablaze.

The dollar index rose 1.043% and the gap between yields on two- and 10-year Treasury notes, seen as an indicator of economic expectations, narrowed further to 25.6 basis points.

If it were not for Russia’s invasion of Ukraine, the Federal Reserve would likely raise interest rates by 50 basis points at its policy meeting in two weeks, said JJ Kinahan, chief market strategist at TD Ameritrade in Chicago.

But Ukraine is overshadowing everything, Kinahan said. “If Ukraine wasn’t out there this report would be telling us the economy is pretty red-hot … it is truly a blowout number.”

Fed Chair Jerome Powell said this week he would support a 25 basis-point rate increase and would be prepared to move more aggressively later if inflation does not abate as fast as expected.

Stocks sank to one-year lows in Europe while bonds, commodities and crude rallied as the escalating war in Ukraine raised concerns about slowing growth and faster inflation as investors bought up commodities as a hedge.

The STOXX index of 600 European companies sank 2.5% to levels last seen a year ago and pushed the benchmark down 14% in correction territory, meaning 10% or more below its January record high. Euro zone banks, whose exposures to Russia are being closely watched, sank 5%. MSCI‘s all-country world index shed 1.8%, down just over 10% for the year.

On Wall Street, the Dow Jones Industrial Average fell 0.95%, the S&P 500 lost 0.99% and the Nasdaq Composite dropped 0.97%. Worries about how the war in Ukraine will develop rippled across asset classes. A closely watched measure of money-market stress and dollar funding conditions rose to its highest level since May 2020, reflecting the increased risk of banks hoarding the U.S. currency and squeezing liquidity. Euro zone government bond yields fell along with the euro as investors worried that higher commodity prices will dent growth in the European Union.

“It shows how skittish things are and we are not in normal times,” said Mike Kelly, head of global multi-asset at PineBridge Investments.

BofA said the widely tracked CRB commodity index has seen its strongest start to any year since 1915 amid worries over supplies from Russia, one of the world’s biggest exporters of raw materials.

Crude oil, which has hit its highest level in a decade this week, was set for its strongest weekly gains since mid 2020, while corn hit a 10-year high, with wheat futures up 40% on the week.

Aluminium touched a fresh record high in London and is heading for its biggest weekly gain on record amid fears of a squeeze on the metal from Russia. Nickel reached an 11-year high for similar reasons.

“Skyrocketing inflation is what people fear and the best hedge for that is energy and industrial metals,” Kelly said.

Oil markets were also focused on whether the OPEC+ producers, including Saudi Arabia and Russia, would increase output from January.

MSCI‘s broadest index of Asia-Pacific shares ex-Japan tumbled as much as 1.5% to 585.6, the lowest level since November 2020, taking the year-to-date losses to 7%.