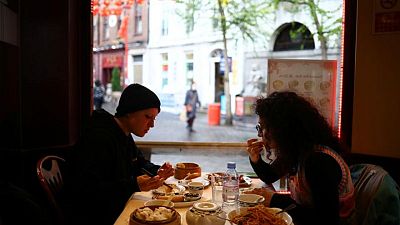 LONDON – Price rises in Britain’s services sector last month were the most widespread in more than 25 years as businesses recovered from the Omicron wave of coronavirus cases, a survey showed on Thursday.

The IHS Markit/CIPS services Purchasing Managers’ Index (PMI) rose to 60.5 in February from 54.1 in January, just below an initial flash estimate of 60.8 but the highest since June.

However, the survey showed the highest reading for the proportion of firms raising prices since the series began in July 1996 – news which is likely to alarm the Bank of England as consumer price inflation approaches a 30-year high.

The broader composite PMI, which includes Tuesday’s upwardly revised manufacturing PMI, rose to 59.9 from 54.2, also the highest since June 2021. Readings above 50 indicate growth.

“Although the latest set of PMI data were encouraging, the inflationary picture still has the potential to limit growth, while it remains to be seen what impact the Russian invasion of Ukraine will have on the service sector and wider economy,” said Andrew Harker, economics director at IHS Markit.

Financial markets expect the Bank of England to raise rates later this month from 0.5% to their pre-pandemic level of 0.75%, and for rates to reach 1.5% by August.

The BoE forecast last month that inflation would peak at around 7.25% in April when regulated household energy tariffs jump by more than half.

BoE policymaker Michael Saunders warned on Tuesday that Russia’s invasion of Ukraine and the impact on energy prices risked pushing that peak even higher.

IHS Markit said around a third of companies surveyed raised their prices last month, with many reporting higher costs for staff salaries, fuel, utilities and raw materials such as food.

An index for input costs for services companies was its second-highest on record, contrasting with a fall to a 10-month low for the same measure for manufacturers earlier in the week.