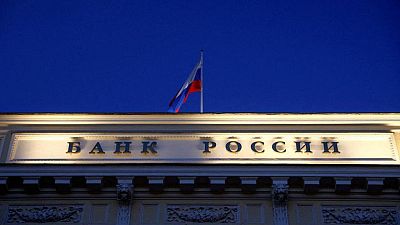 LONDON – With much of Moscow’s $640 billion reserves under lock and key in the West and sanctions crippling cross-border capital flows, investors fear Russia may be heading for its first ever default on sovereign hard currency debt.

A rouble debt default has precedent — Moscow reneged on OFZs during its 1998 financial crisis, but even then it kept up dollar bond payments. Before the latest devastating Western sanctions which froze central bank assets, such a Russian default was on no one’s radar.

That is partly because Russia, which calls its actions in Ukraine a “special operation”, has just $40 billion in international bonds outstanding across 15 dollar- or euro-denominated issues — tiny relative to peers and its own gross domestic product.

The bonds mostly traded well above par until mid-February, as investors shrugged off Moscow’s troop build-up on Ukraine’s border and U.S. warnings an invasion was imminent.

Fast forward two weeks and bond investors have come around to the view that default is no longer a distant prospect. Russia’s risk premium has soared and credit default swaps – derivatives used to insure exposure – are at record highs.

And some dollar bonds now are priced below 30 cents in the dollar, with trading volumes abysmal.

Foreigners, who hold around half Russia’s hard currency debt, are focusing on March 16 when it must pay $107 million in coupons across two bonds.

“Will Russia pay or not? There’s very significant uncertainty at this point, after the sanctions applied to the Russian central bank and the ministry of finance,” said Marcelo Assalin, head of emerging market debt at investment manager and financial services firm William Blair in London, which holds some Russian debt.

JPMorgan and the global banking lobby group, the Institute of International Finance (IIF), have both warned there is a significant rise in risk that Russia could be headed for its first external debt default.

March 16 is the first of several payments, with another $359 million due on a 2030 bond due on March 31. The first principal payment is due on April 4 when a $2 billion bond matures.

In theory, Russia has ample reserves to cover debt. In practice, the asset freeze has shrunk what the central bank has available to make payments.

The central bank and the finance ministry did not reply to a Reuters request for comment on the possibility of defaults.

Russia might be able to pay nonetheless, using available cash and even without SWIFT. But many argue it has little incentive to do so, given the West’s targeting of savings it had held offshore.

“Western governments’ resolve to cut off Russia from the international financial system, combined with a potentially weaker willingness on the part of the Russian government to service its debt on time and in full, raise the probability of more severe credit outcomes for foreign holders of Russian debt securities,” rating agency Moody’s said.

Moscow has already banned foreign investors from selling domestic Russian assets and ordered a temporary suspension of payments on securities to foreign entities.

For Moody’s, the move reflects “an increasing lack of predictability of policy decisions”

The bonds themselves have been issued with a mix of terms and indentures, notes JPMorgan. Notably, bonds sold after Russia was sanctioned over its 2014 annexation of Crimea contain a provision for alternative currency payments.

If “for reasons beyond its control” Russia was unable to make payments or interest in the currencies the bonds were issued in, dollar and euro, payments can be made in dollars, euros, British pounds or Swiss franc, the documentation shows.

Crucially, the rouble is listed as an alternative currency option for bonds issued since 2018, JPMorgan notes.

Because most of the eurobonds have a grace period of 30 days on both principal and coupon payments, Morgan Stanley calculates the earliest possible default could be April 15, when the grace period expires on the 2023 bond coupon.

Meanwhile default fears have also crept into the $35 billion market of Russian corporate debt. State-controlled Gazprom must repay a $1.3 billion dollar bond on March 7 — a litmus test of Moscow’s attitude towards foreign creditors.