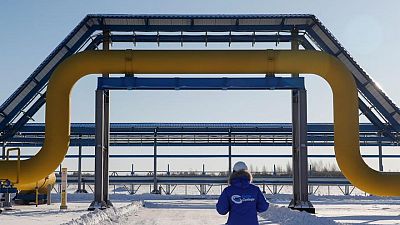 – Market-based inflation gauges are flashing red as the war in Ukraine threatens to exacerbate already high energy prices, pushing investors to seek protection in the inflation-linked bonds they had dumped since January.

Energy supply concerns fanned by Russia’s invasion of Ukraine lifted Brent crude above $105 a barrel and European gas prices have risen 50%-60% since the start of last week.

“UK inflation has been very bid at the front end and that’s really just reflective of the front contract on the natural gas,” said Paul Rayner, head of alpha strategies at Royal London Asset Management.

Yields on British one-year inflation-linked bonds — or linkers as they are known — have fallen 80 basis points since the start of last week, touching a record low below -7% and at one point implying an inflation rate over 9%.

Before the war in Ukraine, the Bank of England had forecast that inflation would peak at a 30-year high of around 7.25% in April when a 54% rise in regulated household energy bills takes effect.

In Germany, the biggest consumer of Russian gas, the two-year inflation-adjusted yield — which strips out anticipated inflation — fell 60 basis points since the start of last week and implied an inflation rate as high as 3.7%, compared to 2.4% at the start of February.

U.S. moves are smaller, with yields on one-year Treasury Inflation Protected Securities (TIPS) down around 20 bps.

Those declines partly reverse a surge seen from the start of the year, when expectations of significantly tighter central bank policy fuelled a linker selloff and U.S. and German 10-year real yields had risen 70 bps and 40 bps respectively by early February..

Many caution that inflation rates implied by linkers are distorted by factors such as liquidity, central bank purchases and in Britain, huge pension fund demand.

Growth would slow to 2.8%, well below the 4% predicted by the European Commission for 2022.

The European Central Bank’s chief economist has also told policymakers the conflict may reduce output by 0.3%-0.4% in a “middle scenario”.

That fear of a growth hit could slow central banks’ turn towards tighter post-pandemic monetary policy. The Bank of England might pare its next rate hike, while the ECB may delay making firm promises.

“What’s interesting in inflation-linked bonds… is you get exposure to the inflation risk and at the same time it’s almost a safe-haven asset, so I think it makes it doubly attractive,” Krizan at Allianz said.