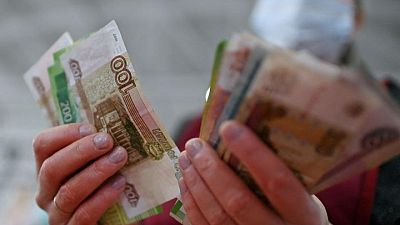 -The Russian rouble tumbled to a record low in extremely volatile trade on Monday, losing a third of its value so far this year, but an emergency rate hike and other urgent measures adopted by the central bank helped it trim losses.

The Bank of Russia had sold around $1 billion from its reserves on Thursday, Feb. 24, the day Russia invaded Ukraine. But Governor Elvira Nabiullina said the central bank had stopped interventions on Monday due to the latest western sanctions, suggesting the rouble was supported by other unnamed market participants.

Russian markets suffered after Western countries stepped up sanctions in retaliation for Russia’s invasion of Ukraine, the biggest assault on a European state since World War Two. In response, President Vladimir Putin ordered his military command to put nuclear-armed forces on high alert on Sunday.

It had earlier touched a record low of 120 to the dollar on electronic currency trading platform EBS, and was still trading considerably higher there than in Moscow. Per euro, the rouble closed 14% lower at 106.0.

Russia’s sovereign hard currency bonds have suffered a dramatic decline over the past few days, though losses sharply accelerated on Monday with many of the country’s dollar bonds dropping more than 40 cents in the dollar on the day and longer-dated issues trading at deeply distressed levels of 29-33 cents, Tradeweb data showed.

The cost of insuring exposure to Russia’s debt through credit default swaps soared to a record 1200 basis points, around tenfold the 124 bps level it stood at by end-December.

Moscow calls its actions in Ukraine a “special operation” that it says is not designed to occupy territory but to destroy its southern neighbour’s military capabilities and capture what it regards as dangerous nationalists.

“The rate hike to 20% can very substantially limit the ability to open positions against the rouble… But new shocks from the geopolitical sphere and sanctions can lead to unpredictable spikes in supply and demand that can disrupt the balance,” said Maxim Biryukov, senior analyst at Alfa Capital.

Trading in equities on the Moscow Exchange was closed, but depository receipts and exchange-traded funds listed in London and Frankfurt did open for trading with the London-listed iShares MSCI Russia ETF slumping 48%, taking year-to-date losses to 70%.

Dominant state lender Sberbank’s depositary receipts in London dropped more than 70% on the day and are down 93% year-to-date. Its European arm faces failure, the European Central Bank (ECB) warned, after a run on its deposits sparked by the backlash from Russia’s invasion of Ukraine.

Russia is extremely likely to default on its external debts and its economy will suffer a double digit contraction this year after the Western sanctions, the Institute of International Finance said on Monday.

Russia’s central bank scrambled to manage the fallout of the sanctions that will block some Russian banks from the SWIFT international payments system, with a slew of measures on Sunday.

The central bank said it would resume buying gold on the domestic market, launch a repurchase auction with no limits and ease restrictions on banks’ open foreign currency positions.

Analysts at Rabobank had warned before the Moscow Exchange opened that the sanctions on currency reserves removed what little support the rouble had.

“Even the gold is not liquid if nobody can use FX in exchange for it. There will be a complete collapse in the rouble today,” they wrote.

Ray Attrill, head of FX strategy at National Australia Bank, said in a note on Sunday, “a collapse in the rouble appears inevitable on Monday morning”, and there was an increased risk of a Russian debt default as a result of the weekend developments.