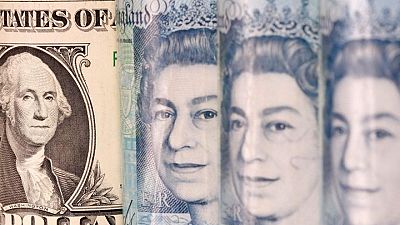 LONDON – Sterling rose against the euro but was little changed against the dollar on Monday after Western nations imposed tough new sanctions on Russia for its invasion of Ukraine.

Against the euro, sterling was up 0.5% at 83.64 pence at 1515 GMT as the single currency weakened following the sanctions.

Sterling recovered against the dollar to trade broadly unchanged at $1.3419 as ceasefire talks between Russian and Ukrainian officials began at the Belarussian border.

“GBP has been holding up surprisingly well – given that it is normally more sensitive to financial developments than others,” ING Global Head of Markets, Chris Turner told clients.

“Investors will be interested to see whether BP’s planned sale of its stake in Rosneft has any FX implications”, he added.

Energy company BP said it plans to exit its Russian oil and gas investments, the most aggressive move yet by a company in response to Moscow’s invasion of Ukraine.

The impact of the invasion on the Bank of England’s future path for interest rates continues to be a theme in the near-term.

Bank of America said they observed a concerted pushback on market rate hike pricing last week, with a majority of rate setters appearing to be against hiking in 50 basis point increments.

BoE policymakers Michael Saunders and Catherine Mann are scheduled to speak on Tuesday followed by speeches by Silvana Tenreyro and Jon Cunliffe on Wednesday, the latter on financial stability.

“Michael Saunders on Tuesday will be the key one to watch, as he voted for a 50bp hike and generally gives clear views,” Bank of America strategists said.

In the meantime, the British public’s expectations for inflation for the coming 12 months hit a record high of 5.6% in February, according to a Citi/YouGov survey.

Separately, data showed on Monday that business confidence in the UK rose by five points to a five-month high of 44, according to the Lloyds Business Barometer.