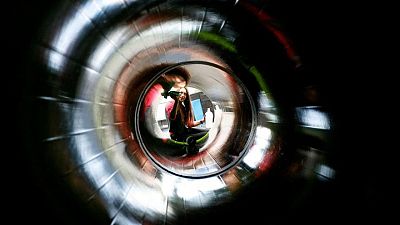 BERLIN -Germany signalled a U-turn in key energy policies on Sunday, floating the possibility of extending the life-spans of coal and even nuclear plants to cut dependency on Russian gas, part of a broad political rethink following Moscow’s invasion of Ukraine.

Europe’s top economy has been under pressure from other Western nations to become less dependent on Russian gas, but its plans to phase out coal-fired power plants by 2030 and to shut its nuclear power plants by end-2022 have left it with few options.

In a landmark speech on Sunday, Chancellor Olaf Scholz spelled out a more radical path to ensure Germany will be able to meet rising energy supply and diversify away from Russian gas, which accounts for half of Germany’s energy needs.

“The events of the past few days have shown us that responsible, forward-looking energy policy is decisive not only for our economy and the environment. It is also decisive for our security,” Scholz told lawmakers in a special Bundestag session called to address the Ukraine crisis.

“We must change course to overcome our dependence on imports from individual energy suppliers,” he said.

This will include building two liquefied natural gas (LNG) terminals, one in Brunsbuettel and one in Wilhelmshaven, and raising its natural gas reserves.

These plans will likely be a boon for Germany’s top utility RWE, which has been backing efforts by German LNG Terminal, a joint venture of Gasunie, Oiltanking GmbH and Vopak LNG Holding, to build an LNG terminal in Brunsbuettel.

Separately, the German government has asked RWE’s smaller rival Uniper to revive plans to build an LNG terminal in Wilhelmshaven, Handelsblatt newspaper reported on Sunday, after the company scrapped such plans in late 2020.

Russia has since invaded Ukraine, prompting the West to slap further sanctions on Moscow and making the energy supply issue even more pressing.

The revamp of energy priorities comes alongside a paradigm shift in German foreign and defence policy, with Scholz also announcing a dramatic hike in military spending.

Germany last year embarked on an ambitious shift towards solar and wind power and Greens member Oliver Krischer on Sunday said a draft law to ensure renewables will account for 100% of Germany’s power supply by 2035 already was completed.

Germany will also increase the volume of natural gas in its storage facilities by 2 billion cubic metres (bcm) via long-term options and will buy additional natural gas on world markets in coordination with the European Union, Scholz said.

Germany has 24 bcm of underground caverns of gas storage, which are currently around 30% full, according to industry group Gas Infrastructure Europe data.

Germany is also weighing whether to extend the life-span of its remaining nuclear power plants as a way to secure the country’s energy supply, the country’s economy minister Robert Habeck, a member of the Greens, said.

Asked by German broadcaster ARD whether he could imagine allowing nuclear plants to run longer than planned under Germany’s exit plan, which foresees shutting the country’s three remaining plants by the end of 2022, he said: “It is part of my ministry’s tasks to answer this question … I would not reject it on ideological grounds.”

Isar 2, Emsland and Neckarwestheim 2 are the last remaining nuclear plants producing power in Germany after the country a decade ago decided to phase out the fuel in the wake of Japan’s Fukushima disaster.

Habeck also said letting coal-fired power plants to run longer than planned was an option, throwing into doubt Germany’s ambitious exit from coal, which is planned for 2030.

“There are no taboos on deliberations,” Habeck said, adding that it was Germany’s goal to ultimately choose which country will supply its energy.

“Being able to choose also means, in case of doubt, saying goodbye to Russian gas, coal or oil. And should Russia wilfully cut off this supply, then the decision has of course been made,” Habeck said.

“In that case they will never be rebuilt. I think the Kremlin knows that, too.”