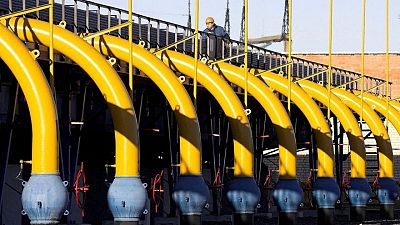 Markets have been on edge about possible disruptions to energy supplies following Russia’s invasion of Ukraine, although Russian commodity exports have not been seriously affected so far. Russia calls its actions in Ukraine a “special operation”.

According to renominations, or preliminary bids, the pipeline is expected to stay in reverse mode until at least Monday morning.

It had shipped gas in normal mode – westbound, from Poland to Germany – for around 10 hours overnight, mostly at a scale of 12.6 million kWh/h.

Gas in the German-Polish section of the pipeline had been flowing eastward since Dec. 21 as buyers in Poland drew on stored supplies from Germany rather than buying more Russian gas at high spot prices. [NG/EU]

Russian gas giant Gazprom briefly resumed supplies via the link to the West at the start of the weekend amid high demand in Europe, especially from Italy, an industry source told Reuters.

The Kremlin-controlled company started to book westbound transit capacity via the pipeline at daily auctions on Friday and Saturday.

The source, who sought anonymity because he was not authorised to speak to media, said the prospect for long-term westbound supplies was not clear amid market volatility.

The pipeline usually accounts for about 15% of Russia’s westbound supply of gas to Europe and Turkey.

Gazprom has not ordered any transit capacity for February and March via the route at monthly auctions, nor has it booked capacity for the second and third quarters of the year.

Russia has also recently boosted supply to Europe via Ukraine as a spike in prices has made it cheaper to buy Russian pipeline gas than to make purchases on the spot market, Refinitiv analysts said.