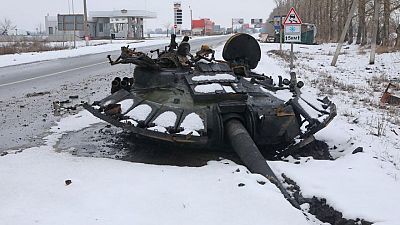 LONDON – World markets were set for another tumultuous week after Western nations announced a harsh set of sanctions to punish Russia for its invasion of Ukraine and as fighting intensified for a fourth day.

U.S. stocks have fallen nearly 8% so far this year, on track for the worst annual start since 2009, and worries over the intensifying conflict in Ukraine has shaken markets across the world.

Though Wall Street ended higher on Friday with major indices up between 1.5%-2.5%, analysts expected markets to come under selling pressure on Monday.

“Nobody likes uncertainty, investors certainly dislike uncertainty and we are looking at a pretty protracted conflict,” said Peter Kinsella, global head of FX strategy at UBP.

“It seems to me we are in the opening stages of a new Cold War, that is pretty clear and that will weigh on sentiment for a long time.”

Russian military vehicles pushed into Ukraine’s second-largest city on Sunday and explosions rocked oil and gas installations on a fourth day of the biggest assault on a European state since World War Two.

In response, the United States and its allies moved to block certain Russian banks’ access to the SWIFT international payment system. The measures also include restrictions on the Russian central bank’s international reserves and will be implemented in the coming days. [PnL8N2V117C]

“Friday’s bounce looked like a genuine short squeeze but Monday should bring some fresh selling pressure as the SWIFT sanctions and the growing likelihood of freezing Russian currency reserves will inflict some real financial pain across markets,” said John Marley, CEO of forexxtra, a London-based FX consultancy.

The Russian invasion comes at a time when investors are already worried about expensive market valuations and hawkish central banks with world stocks falling to a 10-month low on Thursday and down more than 7% so far this year.

The latest developments could also put fresh pressure on energy and grain prices, with Brent futures having topped $105 per barrel and wheat futures scaling to levels last seen in mid-2008 on Thursday before easing back somewhat on Friday.

Safe-haven assets will be in demand with U.S. Treasuries, German Bunds and the Swiss franc likely to see heavy buying as traders digest the implications of the latest round of sanctions.

Russia’s main stock index closed up 20% on Friday after Thursday’s record 33% drop while the rouble recovered somewhat after falling to a record low on Thursday at 90 per dollar with analysts expecting more pain on Monday.

“There is increased risk of a Russian debt default, last seen in 1998, as a result of weekend announcements,” said Ray Attrill, head of FX strategy at National Australia Bank.

Volatility gauges across markets, already at elevated levels, are expected to shoot higher on Monday while investor buying of derivative contracts to protect themselves against further losses are likely to surge.