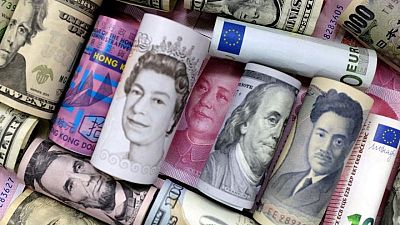 By Saikat Chatterjee and Dhara Ranasinghe

LONDON -Russia’s invasion of Ukraine has upended several popular trades, inflicting heavy losses on investors bullish on European stocks and the euro and also those bearish on the Japanese yen and government debt.

The view before the aggression was that global economic recovery was chugging along, company earnings were robust and central banks, facing rising inflation, were on course to raise interest rates several times this year.

But while the spiking geopolitical tensions continue to fan inflationary pressures via the oil channel, they are undermining some of the biggest consensus trades in markets.

Some of the more entrenched bets will come under further pressure if the conflict threatens the broader growth outlook, Hurd predicted.

Below are five charts showing the main consensus positions in global markets:

The premise that the Bank of Japan would lag global counterparts in tightening policy had made the Japanese yen every currency trader’s preferred short — hedge funds’ net short bets on the yen were just below three-year highs, according to data from Commodity Futures Trading Commission.

The yen’s rise to a three-week high on Thursday would have dealt a blow to those positions.

Another large consensus trade has been long euros where net longs are at six-month highs and rose by $1.2 billion in the latest week, according to CFTC.

Derivative markets show traders were frantically buying puts this week, an option to protect against losses, as the single currency fell below $1.11, its lowest levels since July 2020.

Meanwhile the growing trend to bet against the dollar — long dollar positions slipped to the lowest since August – also backfired, as the dollar index jumped to a mid-2020 high.

According to a BofA monthly survey, European stocks were investors’ most preferred region with investors a net 30% overweight.

But it is also the most vulnerable to fallout from the Russia conflict, and accordingly it European stocks slipped on Thursday to the lowest since May 2021, while European bank shares, a popular trade due to ECB rate hike bets, have shed 6.5% this week.

Goldman Sachs slashed its European stocks forecast by 8% by end-2022 while the European Central Bank’s chief economist said the conflict could shave as much as 0.4% of euro zone GDP.

As risk aversion takes hold, the price of put options on European stock indexes at 10% below current levels for contracts expiring in March has jumped sharply. Open interest – the number of contracts outstanding, is at the highest level ever.

Convinced that the U.S. Federal Reserve would go big and fast with interest rate hikes in coming months, traders had piled on bets against Treasuries and most major bond markets.

Treasury shorts on the rate-sensitive front-end of the bond curve, jumped, with bearish bets on 2-year note futures at the highest since October.

Those bets are being rapidly unwound amid the dash for safe trades. Bets of a 50 bps rate hike by the Fed next month have melted by half from a week earlier, according to the CME’s Fedwatch tool, while expectations of ECB rate hikes have also dropped.