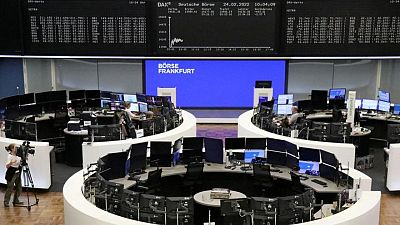 -Europe’s main stocks index roared back on Friday, lifting off nine-month lows with banks leading a broad-based rally as investors hunted for bargains following a bruising sell-off after Russia’s invasion of Ukraine.

Hopes for diplomacy aided sentiment after the Kremlin said Russian President Vladimir Putin is ready to send a delegation to Minsk for negotiations with representatives of Ukraine. This come after missiles pounded Kyiv as Russian forces pressed their advance.

The rally made back all of Thursday’s steep losses, but was not enough to pull the benchmark pan-European STOXX 600 index up for the week as the geopolitical tensions sent investors fleeing from riskier assets. The index marked its second week in the red, down 1.6%, and is off about 8% from its peak in January.

“We don’t think this is a time to be outright negative on equities — sentiment is already poor, at least some of the risks have been priced in,” said Mark Haefele, chief investment officer at UBS Global Wealth Management.

Banks jumped 4.3% to regain half of the previous session’s dive. But they braced for impact from likely new sanctions from the West on Russia that could halt Russian banks’ access to European financial markets.

The possibility of the conflict slowing the hawkish pace of central banks have also weighed on lenders. The European Central Bank affirmed its commitment to ensure price and financial stability on Thursday.

The mood remained fragile going into the weekend as was evident by defensive buying. Industrial stocks, utilities, healthcare and consumer staples were among the biggest boost to the STOXX 600.

“As long as uncertainty persists we expect (European equities) to remain volatile and defensive,” said HSBC analysts in a note.

“Commodity sensitive sectors such as energy and basic materials may also perform strongly, thereby reversing the value rally… The scale of action taken by NATO countries is likely to determine how markets react.”

With oil and gas prices soaring in the wake of the Ukraine crisis, investors fear inflation will run even hotter and disrupt economic recovery in the euro zone due to its heavy reliance on Russia for gas supplies.

The Ukraine conflict may reduce the euro zone’s economic output by 0.3%-0.4% this year, the ECB’s chief economist said.

Among individual stock, Porsche SE and Volkswagen gained 3.8% and 5.2% respectively after the carmakers fleshed out details of a possible Porsche listing.