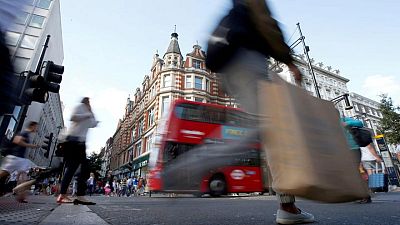 LONDON – British consumer confidence suffered its biggest month-on-month drop in February since the start of the coronavirus pandemic, as people worried about fast-rising inflation, higher taxes and interest rates going up, a survey showed on Friday.

The GfK Consumer Confidence Index slumped to -26 from -19 in February to touch its lowest level since January of last year when Britain was under a tight lockdown.

“Fear about the impact of price rises from food to fuel and utilities, increased taxation and interest rate hikes has created a perfect storm of worries that has shaken consumer confidence,” Joe Staton, GfK’s client strategy director, said.

Sentiment about the next 12 months for personal finances and the wider economic situation fell particularly heavily.

“There’s clear anxiety in these findings as many consumers worry about balancing the household books at the end of the month without going further into debt,” Staton said.

“Slowing consumer spend slows the wheels of the UK economy so this is unwelcome news,” he added.

Britain’s consumer price inflation rate is set to go above 7% in April – its highest in more than 30 years – when domestic power tariffs will increase by more than half. Higher social security contributions will also kick in that month.

The BoE has raised its benchmark Bank Rate twice since December and financial markets expect it to increase the interest rate again to 0.75% in March, even as the central bank forecasts a slowdown in the economy.

Prime Minister Boris Johnson’s government has announced some measures to soften the hit from the higher power tariffs but has resisted pressure to stop the national insurance contribution increase, saying it is needed to pay for Britain’s health and social care services.

GfK’s measure of how willing people are to make big purchases fell by five points to -15.