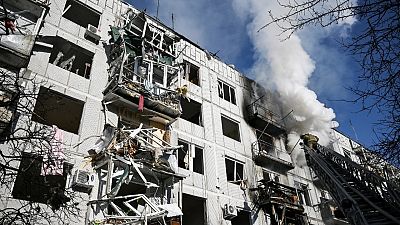 Firefighters work on a fire on a building after bombings on the eastern Ukraine town of Chuguiv on February 24, 2022, as Russian armed forces are trying to invade Ukraine   -   Copyright  ARIS MESSINIS / AFP
By Euronews and Reuters  •  Updated: 26/02/2022

But researchers who had been sharing this material from social media, known as open-source intelligence or OSINT, found their Twitter accounts had been suspended.

Users who had their accounts suspended shared their concerns in a Twitter thread, calling it an "absurd decision by Twitter".

Twitter said on Wednesday it had mistakenly suspended around a dozen accounts that were posting about Russian military movements and said the action was not due to a coordinated bot campaign or mass reporting of the accounts by other users.

"We've been proactively monitoring for emerging narratives that are violative of our policies, and, in this instance, we took enforcement action on a number of accounts in error," a Twitter spokesperson said in a statement.

"We're expeditiously reviewing these actions and have already proactively reinstated access to a number of affected accounts".

The Twitter spokesperson said the erroneous action had been based on its rules against synthetic and manipulated media.

Ukraine declared a state of emergency on Wednesday and told its citizens in Russia to flee, while Moscow began evacuating its Kyiv embassy in the latest ominous signs for Ukrainians who fear an all-out Russian military onslaught.

Twitter's head of site integrity, Yoel Roth, tweeted that the company was closely investigating what had happened but said mass reporting was not a factor.

"We do not trigger automated enforcements based on report volume, ever, exactly because of how easily gamed that would be," he said.

Tech this week: US probe into TikTok’s impact on kids’ health