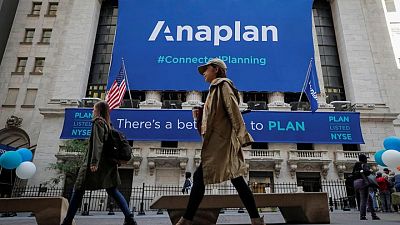 The position is said to be comprised of common shares and cash settled swaps, putting Sachem Head’s economic exposure in Anaplan at roughly 9%, the sources said.

San Francisco-headquartered Anaplan is valued at roughly $6 billion and counts a number of prominent hedge funds as well as big mutual funds among its investors.

Nine people, including Chief Executive Frank Calderoni, currently serve on Anaplan’s board of directors. It could not be determined whether Sachem Head, run by Scott Ferguson, has had private discussions with the company.

Anaplan’s stock price has tumbled 33% over the last two years while the technology-oriented Nasdaq index climbed 43% between February 2020 and now.

Sachem Head is currently trying to take control of US Foods Holding Corp’s 10-member board and has nominated seven director candidates, including Ferguson.

News last month that software company Citrix Systems had agreed to be taken private for $16.5 billion including debt by affiliates of hedge fund Elliott Management and private equity firm Vista Equity Partners, has sparked talk that similar deals could be negotiated in the future.