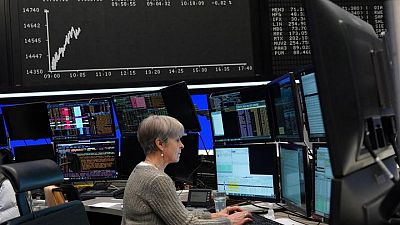 – German government bond yields rose after falling in the session as investors’ focus shifted to monetary policy tightening expectations which overshadowed concerns about an escalating crisis over Ukraine.

Euro zone money markets showed investors scaled back their expectations for European Central Bank moves in 2022 but still forecasting several rate hikes. They priced in an around a 95% chance of a 10 basis point (bps) rate hike in July and one of 40 bps by year-end. [IRPR]

Until last week and following the ECB’s Feb. 3 meeting, money markets were fully pricing in a 10 bps rate hike by June and 50 bps worth of hikes by December.

Russia faced the prospect of new Western sanctions after President Vladimir Putin recognised two regions in eastern Ukraine as independent and ordered the deployment of troops there, deepening Western fears of a major war in Europe. [nL1N2UX0AD]

German business morale improved in February, despite the Ukraine crisis, as businesses hope for an end to the coronavirus crisis, slightly boosting yields.

“If you translate that (a possible conflict in Ukraine) into policy reaction, it would probably mean more fiscal support of some sort, while it’s not a clear cut driver for the ECB and European yields,” he added.

But some investors expect central banks to delay their exit plans from pandemic monetary stimulus until a diplomatic solution of tensions over Ukraine is in sight.

“Tensions over Ukraine seem likely to last longer than expected, and, in such a situation, there are increasing probabilities that the ECB will delay its monetary tightening,” said Mauro Valle, head of fixed income at Generali Investments Partners.

He believes money market expectations pricing in two rate hikes in 2022 “are slightly exaggerated” and forecast the ECB would raise rates “just once this year even if geopolitical tensions dissipate”.

Some in the markets were watching moves in 5-year Russian credit default swaps (CDS) or rouble intraday. Russia’s 5-year CDS was at 310 bps.

“In early 2015, the 5y Russia CDS widened to above 600bp more than half a year after the annexation of Crimea when the sanctions started to bite, and the Russian economy slid into recession,” Commerzbank analysts said in a research note to clients.

The chart below shows the Bund future and the Russian CDS.

Italian government bond prices outperformed their peers after recently underperforming. The 10-year yield fell 3 bps to 1.88%, while the spread between Italian and German 10-year bond yields tightened 3 bps to 166.