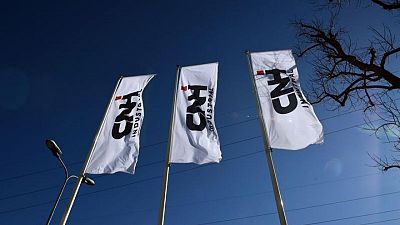 MILAN -Italian-American vehicle maker CNH Industrial on Tuesday estimated total revenue growth of up to 24% through 2024 as it presented a new business plan after spinning off its truck, bus and engine units.

CNH Industrial completed the spin-off of its truck, bus and engine operations, now separately listed as Iveco Group <IVG.MI>, at the start of 2022. It is focusing on higher-margin agriculture and construction machine businesses, whose data content, autonomous technologies and alternative fuels are increasingly at the center of CNH’s business.

The group controlled by Exor NV, the holding company of Italy’s Agnelli family, forecast net sales of between $20 billion and $22 billion in 2024, up from $17.8 billion last year, according to slides in the presentation.

After buying Raven Industries last year for $2.1 billion to bolster its position in precision agriculture and autonomy, CNH will now focus on “disciplined” M&A activity, it added.

“We’re not buying to get bigger. Our dollars are going to go towards driving organic growth,” Chief Executive Scott Wine told analysts during the presentation.

“Disciplined M&A will be a key part of our strategy going forward.”

The company added it was seeing strong buyer interest for Raven’s engineered films and aerostar units, the two non-core businesses it plans to sell.

Chief Digital Officer Parag Garg said CNH was well placed to be leaders in autonomy and help customers throughout the entire farming cycle.

Over the next three years, the company plans to increase investment for organic growth in construction by 26%, compared with 68% in technology and 53% in agriculture.

“Automation is a key strength for CNH Industrials tech strategy, already bringing benefits to farmers across the world across the whole cycle and helping build a backbone for it to deliver an autonomous future,” he told analysts.

CNH is relying in part on price increases to offset higher costs, and sees supply chain problems throughout the year. Company executives said “incremental” price increases will remain, before prices normalize in 2023.

Advancement in electrification for its mid to large construction equipment is a priority, in addition to the company’s core focus on its excavators and powertrains, executives said.