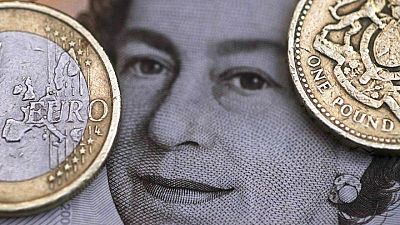 LONDON -Sterling fell to a six-day low against the dollar and euro on Tuesday with investors cautious on the British currency amid the Russia-West stand-off over Ukraine.

But the pound’s drop against the euro was compounded after the single currency strengthened earlier in the day on headlines that a Kremlin spokesperson said Moscow remained open to diplomacy.

According to analysts at ING, good UK data and bets the BoE will continue to raise rates have capped sterling falls, while the geopolitical backdrop is weighing on the single currency to a greater degree than on sterling.

“Markets are likely estimating a greater fallout from a collapse in diplomatic relationships with Russia for the eurozone than for the UK,” the ING analysts said in a research note on Tuesday.

The BoE raised interest rates to 0.5% this month from 0.25%, with Ramsden part of a minority who then voted for a bigger increase to 0.75%.

“Ramsden cautioned that current market pricing for rate hikes would leave inflation below target in two years — echoing the warning from the Bank at this month’s meeting that markets are too aggressively priced for policy tightening,” Shaun Osborne, chief currency strategist at Scotiabank, told clients.

Investors are fully pricing in another 0.25% rate hike at the BoE’s next scheduled meeting on March 17.