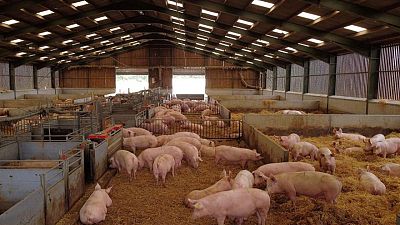 BIRMINGHAM, England – Britain’s immigration policies have caused a crisis in the pig sector while the government has failed to support domestic food production at a time of global instability, Minette Batters, President of the National Farmers Union said on Tuesday.

“Right now, the eyes of the world are currently on the growing tension and potential war between Russia and Ukraine,” she told the NFU’s annual conference.

“I would hope there are some in government who are taking note that these two countries produce 30% of global wheat exports,” she said, adding the government’s ambition for the countryside seems to be almost entirely focused on anything other than domestic food production.

Batters said the current crisis in the pig sector should have been avoided.

A combination of Brexit and COVID-19 have sparked an exodus of east European workers from abattoirs and meat processors, leaving pigs to back up in barns and fields across the country.

“There are currently 200,000 pigs on contract backed up on farm, 40,000 healthy pigs have been culled and simply thrown away. This, truly, is an utter disgrace and a disaster for the pig industry,” she said.

“This is down to the government’s poorly designed change to immigration policy and what I can only say appears to be their total lack of understanding of how food production works and what it needs.”

The government claimed to value domestic food production but was making it difficult to find workers to harvest or process it, she said.

Batters said there was a looming crisis in the horticulture sector as new rules could mean a 38% increase in the compulsory wage rate, which growers would have to fund.

“This means there is real risk of further food inflation…and of British growers going out of business.”