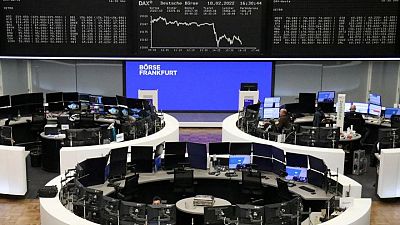 LONDON – Russia-exposed European stocks have been under pressure for weeks amid fears Russia could invade Ukraine and the stand-off has triggered volatility across the European stock market.

After Russian-backed separatists in breakaway regions in eastern Ukraine announced an evacuation of residents on Friday, Germany’s main stock index, the most sensitive to a potential conflict in Ukraine, fell more than 1% and headed towards a four-month low hit earlier this week.

The United States has said Russia could invade Ukraine at any time and might create a surprise pretext for an attack, and reaffirmed a pledge to defend “every inch” of NATO territory.

Investors are monitoring shares most at risk from potential sanctions against Russia, including banks, oil, mining, consumer and construction material, companies with exposure to Russia and Ukraine.

Citi analysts said their basket of European companies with Russian exposure has underperformed during periods of heightened tensions, as in 2014 and 2018, following Western sanctions against Russia.

European stocks with exposure to Ukraine include London-listed iron pellet producer Ferrexpo with its entire operation based in the country, Citi said.

According to Jefferies analysts, France’s video gaming company Ubisoft has 4% of its workforce in Ukraine, while Sweden-based healthcare and diagnostic services provider Medicover made 8.5% of its sales in the country.

European banks with local branches in Russia are the most exposed to risk resulting from potential sanctions in the event of any further escalation, JP Morgan said.

Austria’s Raiffeisen Bank International derived 39% of its estimated net profit last year from its Russian subsidiary, while Hungary’s OTP, UniCredit and Societe Generale made between 6% and 7% of theirs in Russia last year, JPMorgan numbers showed.

As Russia supplies 35% of Europe’s gas demand, the tensions in Ukraine have increased the risks of energy disruptions in Europe, Goldman Sachs analysts said.

“We would expect the German DAX and MDAX (the mid cap index) to be more vulnerable than other country indices, mainly due to the reliance of their companies on energy for their production,” they said.

They expect oil and gas companies to outperform on headlines of further escalation and rising European gas prices, citing Total and Equinor as the main beneficiaries.

Note: The graphic above is Citi’s full list, reprinted with permission of Citi Research and not to be reproduced.