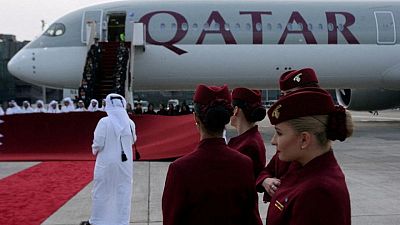 -A UK judge ordered planemaker Airbus to delay any practical impact of a decision to revoke a $6 billion jet order from Qatar Airways for several weeks, as two of aviation’s most powerful players wage an escalating court battle.

The move effectively prevents the planemaker from allocating valuable early delivery slots for the in-demand A321neo plane to other airlines, pending an early April hearing at which Qatar Airways plans to seek an injunction reinstating the contract.

The two sides have been clashing for months about surface flaws on A350s, some of which have been grounded by Qatar over safety concerns as its airline sues Airbus for $600 million.

Airbus acknowledges quality problems but accuses the airline of mislabelling them as a safety issue to secure compensation.

The row widened in January when Airbus revoked a deal with Qatar for 50 A321neos, saying its refusal to take disputed A350s had triggered a clause linking the two plane deals.

In a Friday hearing, Qatar Airways condemned the decision.

“They took the risk and knew it would be absolutely incendiary. We have paid $330 million for this (A321neo) contract so far and they knew it was a hand grenade being thrown into our bunker,” Qatar Airways lawyer Philip Shepherd said.

The technical hearing gave glimpses of what looks set to be a highly charged court battle in aviation, with a hearing on Qatar’s request for an injunction set for the week of April 4, and a court date on the main A350 dispute set for April 26.

Pending the first of those hearings, a UK judge rejected an Airbus request for more time to prepare and ordered the company not to do anything in the meantime that may scupper its ability to fulfil the A321neo deal if Qatar wins that part of the case.

Its lawyer Rosalind Phelps said the cancelled planes had been removed from its industrial plans and warned of damage to its supply chain if its hands were tied too severely.

The first plane is due for delivery in February 2023, with planes due to be delivered at a rate of six a year. Planemakers usually order parts up to a year ahead.

Airbus Chief Executive Guillaume Faury said on Thursday it had been forced to cancel the A321neo order to “exercise our rights”. On Friday, he reiterated on BFM TV that Airbus was ready for an amicable solution, adding “it takes time”. Sources close to both sides say there are no signs so far of any truce.

Reuters reported on Thursday that Qatar Airways was expected to seek a ruling to preserve the A321neo deal.

Airbus is meanwhile preparing counter-claims in the A350 case. It has cancelled two out of 23 A350s still on order for Qatar but has agreed not to look for alternative buyers for now.