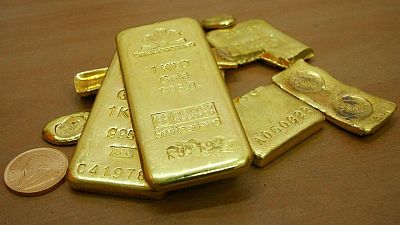 NEWYORK – Gold prices jumped to an eight-month high and safe-haven debt rose on Thursday after U.S. President Joe Biden said there was every indication Russia planned to attack Ukraine, while Moscow accused Washington of ignoring its security demands.

A gauge of global equities fell more than 1% despite strong corporate earnings in Europe as the Ukraine standoff deepened. Russian-backed separatists and Ukrainian forces accused each other of firing shells across a cease-fire line and Britain, as well as the United States, said Russia sought to fabricate a pretext to invade.

U.S. and German government bond yields fell and oil slid as talks to resurrect a nuclear deal with Iran entered their final stages, which could boost crude supplies. Losses were capped by the tension between the West and Russia, a top energy exporter.

A sell-off on Wall Street increased late in the session as the weekend approached with the Ukraine crisis unsettled, said Michael James, managing director of equity trading at Wedbush Securities in Los Angeles.

“The continued weakness, especially in the growth names, is indicative of elevated nervousness and sellers continuing to swamp buyers in just about every stock,” James said.

Marc Chandler, chief market strategist at Bannockburn Global Forex, said due to a U.S. holiday on Monday the weekend was long and added to the heightened uncertainty in the market.

“You as a market participant are not incentivized to be fighting the risk-off mood ahead of the weekend when anything can happen,” Chandler said.

On Wall Street, the Dow Jones Industrial Average fell 1.78%, the S&P 500 lost 2.12% and the growth-oriented Nasdaq Composite dropped 2.88%. The drop in the S&P500 and Nasdaq were their biggest single-day declines in two weeks.

Worries that the Fed would embark on a super-hawkish interest rate-tightening campaign eased after minutes released on Thursday of its last policy meeting signaled a measured, even dovish stance by policymakers.

The Ukraine crisis has unnerved investors who also must watch the Fed and efforts by other central banks to fight soaring global inflation.

“There’s a lot of confusion right now and everybody’s crystal ball is pretty cloudy,” said George Mateyo, chief investment officer at Key Private Bank, speaking of both of Ukraine and how the Fed might tighten monetary policy.

The U.S. economy has weathered COVID-19’s hit on the economy well, with GDP and corporate earnings at peak levels, which bodes well for the market, Mateyo said.

“It’s going to be a challenging year, but not a dire year,” Mateyo added. “Expect some volatility this year, but don’t abandon risk altogether, don’t get super defensive. There’s a lot of missed opportunities inside the market.”

The dollar, also considered a safe haven, initially rose against most currencies but gains subsided and it later was marginally lower – suggesting investors were not yet panicking about the Russia-Ukraine tensions.

However the Japanese yen, a currency investors often buy as a safe-haven, hit its strongest since Feb. 7.