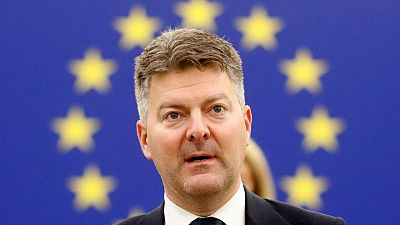 STRASBOURG – Landmark EU rules aimed at curbing the power of U.S. tech giants could be agreed between lawmakers and EU countries as soon as April, with sticking points expected to be thrashed out in coming weeks, a key lawmaker leading the talks said on Tuesday.

Known as the Digital Markets Act (DMA), the rules proposed by EU antitrust chief Margrethe Vestager just over a year ago set out a list of dos and don’ts for online gatekeepers – companies that control data and access to their platforms – reinforced by fines of up to 10% of global turnover.

The DMA in effect targets Apple, Alphabet unit Google, Facebook parent Meta, Amazon and Microsoft. It needs approval from EU lawmakers and EU countries before it can become law.

Lawmaker Andreas Schwab, who has already had two meetings with EU countries on the topic and has scheduled a third on March 1, said he is optimistic of clinching a deal in what would be a record time for a key piece of legislation.

“We still want to finalise this at the end of March, beginning of April,” Schwab told Reuters in an interview.

However he said both sides disagree on the European Commission’s role, with lawmakers insisting on the EU executive as the sole enforcer and with veto power, while EU countries want national watchdogs to have more say and no veto power for the Commission.

Schwab said lawmakers will not compromise on a proposal that would allow regulators to impose structural remedies such as the breakup of any tech giants which breach the rules, even though EU countries are not keen on it.

Still, there is room for compromise, he said, with all sides eager to adopt rules that could set a global standard.