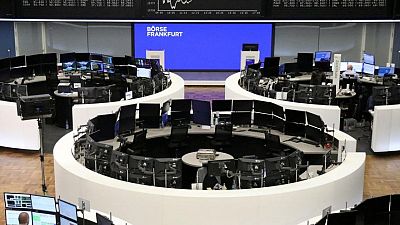 The pan-European STOXX 600 index closed 0.6% lower, but added 1.6% this week, its best since late-December.

Tech stocks fell 2.2%, the most among their peers on Friday. The sector, along with utilities, was among the worst performers this week, under pressure from elevated debt yields.

“Strong quarterly earnings in Europe could dampen the sell-off, but until fears about a more aggressive response from the FOMC dissipate, markets will remain under pressure,” said Stuart Cole, head macro economist at Equiti Capital.

However, “the Fed will do everything it can to avoid spooking the market… akin to what we saw last month, and that means treading carefully,” Cole added.

Meanwhile, Germany’s Chambers of Industry and Commerce Friday cut its 2022 growth forecast for Europe’s biggest economy to 3.0% from the 3.6% it had predicted in October due to rising energy prices, raw material shortages and the lack of skilled workers.

Travel and leisure stocks were the best performers this week, up 7.4% on optimism over easing mask mandates in some U.S. states.

Heavyweight mining stocks were also among the top performers this week, as expectations of improving demand in China drove up commodity prices.

Among a few bright spots, Mercedes-Benz Cars and Vans advanced 6.7% after saying it expects an adjusted return on sales of 12.7% in 2021.

BMW rose 2.7% after it said it will pay 3.7 billion euros ($4.2 billion) to take majority control of its Chinese joint venture.