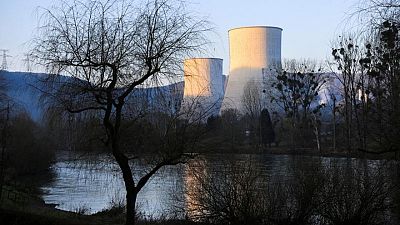 By Benjamin Mallet and Tassilo Hummel

PARIS -State-controlled French power company EDF said on Friday it was making another cut in planned nuclear output because maintenance work will take more of its reactors offline.

EDF’s shares fell 2.8% in early trading while the French 2023 baseload power price rose 4.4% following the announcement, the latest in a series of technical setbacks linked to a problem engineers spotted with corrosion of high-pressure pipework inside some reactors.

An EDF spokesman told Reuters that as part of a programme to address that problem, checks would be carried out on all EDF’s reactors. They would need to be off-line for the checks, but this could be done concurrently with other planned maintenance outages, limiting the impact, the spokesman said.

The new cut in estimated nuclear output related to projections for 2023, which the company said it was scaling back from 340–370 terawatt hours (TWh) to 300-330 TWh.

EDF said this took into account a busy programme of work on the reactors, with 44 outages for maintenance and inspection, including six 10-yearly inspections, plus 2 scheduled outages in 2022 that would continue into 2023.

The programme of work also factored in the extra checks and repairs needed to address the pipe corrosion issue, EDF said in a statement.

“Given EDF’s three-year hedging strategy, we would see the impact of today’s update more in terms of lost revenues as opposed to a hit from power buybacks,” Jefferies analysts said.

“In our view, this hit is already largely priced into the stock price – if not yet in consensus – given that EDF’s market cap has fallen by 15 billion euros since the first nuclear issue update in December,” they added.

The 1.5 gigawatt (GW) Chooz 1 reactor outage date was extended on Friday to Dec. 31 from the earlier expected restart date of Feb. 11. Chooz 1 was one of the reactors taken offline in December after corrosion was detected in pipes at the plant.

“Now that we have opened up a horizon and a guarantee for the next 50 years. …I am sure that EDF is going to re-discover its skills and knowledge, and the difficulties we’ve encountered will disappear,” Le Maire said.

Aside from its engineering challenges, EDF managers say they are facing a major financial hit after the government — which is also the company’s biggest shareholder — ordered the company to sell power at below-market prices.

The government, two months out from a presidential election in which Macron is expected to run, is concerned about mounting public anger over rising energy prices, and has turned to EDF to help soften the impact.