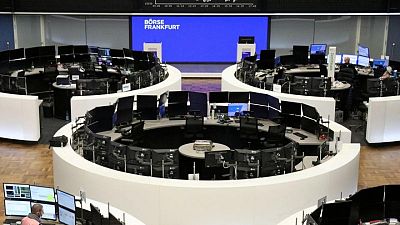 -German stocks on Thursday were boosted by Siemens, which posted a robust quarterly profit, while a slide in French IT firm Atos knocked down European technology shares ahead of key U.S. inflation figures later in the day.

Shares of Siemens jumped 5.8%, on track for its best one-day percentage gain in nearly 13 months, after the engineering and technology group said it was seeing “extraordinary” order intake from its customers.

Germany’s DAX index gained 0.3% to lead gains across continental peers, while the pan-European STOXX 600 index was flat a day after its best session so far this year.

European healthcare stocks gained 0.5%, boosted by a 3.4% rise in AstraZeneca as the drugmaker forecast higher 2022 sales and posted a better-than-expected quarterly profit.

“Earnings season came at just the right time and while there have been bumps in the road, investors will reflect on it positively and it certainly helped to lift the mood,” said Craig Erlam, senior market analyst for UK & EMEA at OANDA.

Investors now await key U.S. inflation data later in the day, which kept most bigger bets in check as it could offer new clues on the pace of U.S. interest rate hikes.

“Inflation and central banks’ response to it remain front and centre in investors’ minds and while the situation has not improved in recent weeks, there has been a clear upturn in sentiment,” Erlam added.

The STOXX 600 has gained 0.9% this month after sliding nearly 4% in January amid rising inflation, hawkish central bank comments, and a slew of earnings numbers.

Investors have recently swapped out growth-oriented parts of the market for value stocks, with European technology stocks down nearly 13% for the year and banks up 14.7% in the same period.

Credit Suisse tumbled 4.7% after warning of weak 2022 earnings as it ended last year with a quarterly loss of $2.2 billion.

Unilever slid 2.3%, as it warned of a hit to profit margins this year and ruled out big acquisitions.