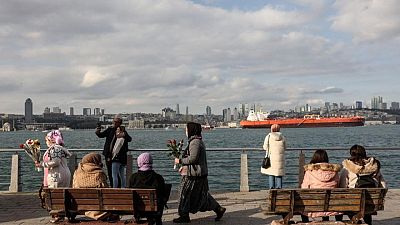 ISTANBUL -Turkey’s current account is expected to record a $15 billion deficit in 2021, lower than government expectations, a Reuters poll showed on Monday, mainly due to rising imports of energy and intermediary goods.

The median poll response of 13 economists was for a deficit of $14.95 billion in 2021, compared to government estimate of $21 billion. Forecasts ranged between a deficit of $14.32 billion and $30 billion.

Turkey’s import-reliant economy, worth $717 billion in 2020, has been prone to big trade deficits and a boom-bust growth cycle that was exacerbated by the coronavirus pandemic.

The current account recorded a deficit of $36.72 billion in 2020, due mostly to a sharp increase in the trade deficit and plunging tourism revenues due to the pandemic fallout.

The median estimate for December showed a deficit of $4 billion, with estimates ranging between a deficit of $3.5 billion and $7.3 billion.

The foreign trade deficit, a major component of the current account, widened 49.3% year-on-year in December to $6.79 billion, official data showed.

Shoring up the current account deficit has been Ankara’s main priority under a so-called new economic programme, which they say will be achieved through raising exports with a competitive exchange rate.

The manufacturing sector dependency on imported intermediary goods is one of the main obstacles for the economy to record a current account surplus, said Gedik Yatirim economist Serkan Gonencler, who expects current account deficit to stand around 0.3% of gross domestic product in 2021.

“The continuation of the narrowing trend in the current account deficit looks reasonable in 2022 with the expectation of strong exports and tourism income potential with current exchange rate levels and narrowing consumer goods imports,” Gonencler said.

“The increase in cost of energy imports and economy’s dependency on imported intermediary goods can limit the velocity of the narrowing.”

As part of the economic plan, the central bank, under pressure from President Tayyip Erdogan, lowered its policy rate by 500 basis points since September to 14%.

The rate cuts led to a sharp decline in the lira’s value, which lost 44% against the dollar last year, stoking prices and causing inflation to jump to 48.7% in January, the highest in nearly two decades.

The central bank is scheduled to announce the December current account data at 0700 GMT on Feb. 11.