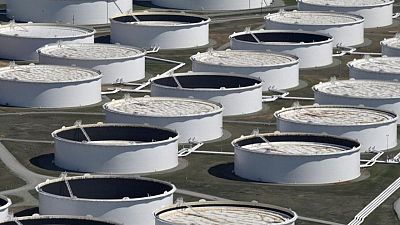 -Oil prices settled lower on Monday on faint signs of progress in nuclear talks between the United States and Iran, which could lead to the removal of U.S. sanctions on Iranian oil sales.

If U.S. sanctions are lifted, Iran could quickly export millions of barrels of crude and help to drive down red-hot oil prices.

Although the sanctions relief will have limited impact on Iran’s struggling economy, markets viewed the move as a signal both sides were determined to reach a deal.

Speaking on condition of anonymity, a European official said top envoys to the Vienna talks – which are indirect because Iran has so far refused to sit down with U.S. diplomats – were likely to meet on Tuesday in the Austrian capital.

“Besides the feel-good vibe coming from the negotiations, the Biden administration is feeling pressure to lower inflation, and the fastest way to do that would be to lower energy prices,” said Bob Yawger, director of energy futures at Mizuho.

Crude prices, which have rallied about 20% this year, are likely to surpass $100 a barrel because of strong global demand, analysts have said.

However, the relative strength index (RSI), a measure of momentum, shows the oil market is currently overbought, and ripe for a pullback.