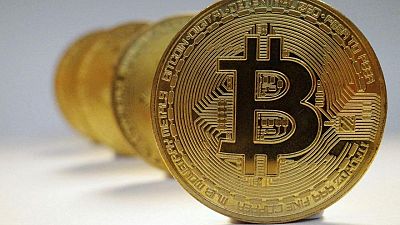 NEWYORK -Bitcoin rose to a four-week high on Monday, climbing for a second consecutive session, driven in part by liquidation of some short positions that have accumulated in the virtual currency’s recent three-month downtrend.

Ether, the second-largest digital currency in terms of market capitalization, touched a three-week peak of $3,180 and was last up 3.1% at $3,153.21. It dropped to a six-month trough in late January, but since then, ether, the token used for the Ethereum blockchain, has surged about 47%.

“Typically, when the market is heavily leaning on one side of a trade, too long or too short, the price can move to counter that weight and squeeze positions,” he added.

Blockchain data provider Glassnode, in its latest research report on Monday, said its charts showed that bitcoin shorts have been under pressure last week, “with a minor skew towards short side liquidations.”

But it added that the magnitude of the liquidation remains “fairly lackluster,” suggesting a short-squeeze is just one factor, among many others, driving the rally in bitcoin.

The crypto market has been in recovery mode in recent sessions, posting institutional inflows of $85 million last week, marking the third week of inflows totaling $133 million, according to a report from digital asset manager CoinShares released on Monday.

Bitcoin led all inflows, with $71 million, the largest since early December and the third straight week of inflows, with a total of $108 million. For the year, however, bitcoin posted net outflows of $60 million.

Ether, on the other hand, posted net outflows of $8.5 million in the week ended Feb. 4, its 9th straight week of outflows, totaling $280 million. That represents 2.2% of assets under management, according to CoinShares.