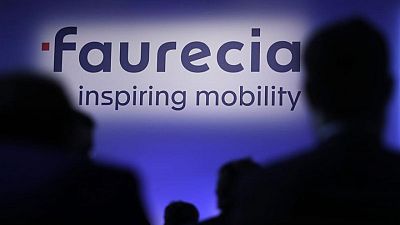 By Tassilo Hummel and Gilles Guillaume

PARIS -France’s Faurecia sealed its takeover of Germany’s Hella on Monday, creating the world’s seventh-largest automotive supplier, and upped its forecast for annual cost savings to at least 250 million euros from 200 million.

Faurecia, which produces seating, electronics and other car interior components, also confirmed a 2025 sales target of above 33 billion euros ($37.72 billion) for the combined group, which will be called Forvia.

“We are combining two profitable companies that have very important complementarities,” Faurecia CEO Patrick Koller said, with the group saying one of two cars produced globally will be equipped with Forvia products.

Shares in Faurecia were up 2.5% in early trading while shares in Hella were flat as the companies sealed the 6.7 billion euro transaction announced in August.

The deal should help “offset higher external headwinds that appeared since the deal announcement, notably inflation … and tends to support our positive stance on the combination,” Oddo BHF analyst Michael Foundoukidis said.

Both firms have been shaken by a slowdown in the auto sector, forcing them to cut their outlooks to reflect the impact of supply chain bottlenecks and COVID-19 restrictions.

Updated guidance on common targets and synergies should be published in the second quarter. But Faurecia’s CFO Michel Favre already said that cost synergies will probably be “a bit higher” than 250 million euros.

Faurecia confirmed it expects revenue to increase by between 300 and 400 million euros by 2025, while cash-flow optimisation is seen generating around 200 million euros per year on average from 2022 to 2025.

Forvia is the umbrella brand for the two companies, which will retain their current names and legal brands. Faurecia now holds 80% of the shares in Hella, which will continue to be a listed company with its own CEO and independent governance.

The group said it will aim to remain an actor of industry consolidation.

Juergen Behrend, a representative of the Hueck family which previously controlled Hella, will be proposed as a member of Faurecia’s board of directors. ($1 = 0.8748 euros)