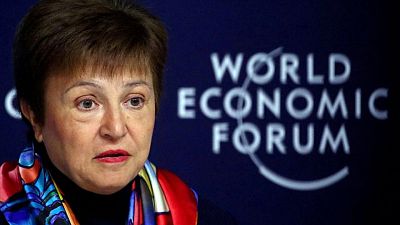 WASHINGTON – The head of the International Monetary Fund said on Thursday it was “too early” to say if the world was facing a period of sustained inflation, but warned that failure to make economies more resilient to future shocks could lead to big problems.

IMF Managing Director Kristalina Georgieva told reporters that global policymakers need to carefully calibrate their fiscal and monetary policies in 2022 to ensure that widespread withdrawal of COVID-19 support funds and rising interest rates did not undermine the recovery.

The IMF last week cut its economic forecasts for the United States, China and the global economy, and said uncertainty about the pandemic, inflation, supply disruptions and U.S. monetary tightening posed further risks.

Unlike the first year of the pandemic in 2020, when finance ministers and central bankers coordinated and synchronized their actions, circumstances varied widely now across the world, and that required more “specificity” in responses, she said.

Georgieva said the COVID-19 pandemic remained the biggest risk facing the global economy, and it was imperative to step up efforts to increase vaccination rates in low-income countries, and meet a global target of vaccinating 70% of people in countries around the world by mid-2022.

The IMF chief said inflation had lasted longer and risen higher than expected, due to supply chain disruptions, stronger-than-expected consumer demand for goods, and climate shocks on food prices.

Asked if those circumstances, and the escalating crisis between Russia and the West over Ukraine, could usher in an era of sustained inflation, Georgieva said, “The short answer is, it is too early to say. What we can anticipate is a more shock-prone world.”

She said efforts now to invest more in resilience of people, the economy and the environment would help create more opportunities for greater job growth and prosperity.

Failure to make such investments would result in a bleaker outlook, which would result in “more unexpected events for which we are not prepared,” Georgieva said, adding that policymakers were also not well-prepared to deal with more than one crisis at a time.