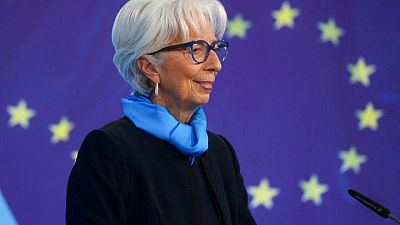 Highly sensitive to ECB rates moves, the euro zone banks gained as much as 1.2% when the European bourses opened on Friday, to touch their highest level since September 2018. They were set for their second best week this year, even after giving up early morning gains by 1200 GMT.

In something of a turnaround, ECB president Christine Lagarde signaled on Thursday for the first time that interest rate hikes this year were not ruled out.

They are now pricing in 10 basis-points of hikes by June 2022 and 50 bps worth of hikes by December.

“We expect a further rise in bond yields to translate into around 5% further upside for banks’ price relative,” he said.

According to analysts, monetary policy tightening by the ECB would support lenders’ margins by reducing the cost of ECB excess liquidity and by rising Euribor rates, the euro zone bank-to-bank lending rates.

But not all banks across the region will equally benefit from tightening central bank conditions.

“This is because liquid, retail-focused banks have seen margins negatively impacted given difficulty in passing negative rates on to depositors,” Jefferies told clients.

Traders had already turned more optimistic about European bank stocks in January after the U.S. Federal Reserve flagged it could raise its rates quicker than expected.