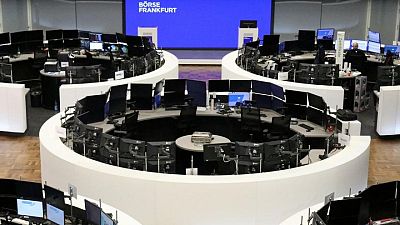 -European shares reversed early gains to trade lower on Friday, as a hawkish shift from the European Central Bank exacerbated worries about the pace and timing of interest rate hikes this year amid mounting inflationary pressures across the region.

The pan-European STOXX 600 fell 0.3%, extending losses after a near 2% drop in the previous session.

The euro was headed for its best week since March 2020 after the ECB on Thursday left its door open to rate hikes this year.

Despite the losses early on Friday, Europe’s benchmark stock index was set to end the week with modest gains, boosted by banks and financials as concerns over a new tightening cycle and rising real yields supported value over growth stocks.

Tech stocks have already shed about 14% so far this year, as investors discounted future earnings from the sector on expectations of higher lending rates.

The Bank of England raised rates for the second time in two months, hiking rates to 0.5% while nearly half its policymakers wanted a bigger increase.

“Inflation concerns are looming ever larger with the cost of living squeeze intensifying, as monetary policy tightening ramps up, and no let-up in soaring energy prices in sight,” said Susannah Streeter, an analyst at Hargreaves Lansdown.

The more aggressive stance of central banks on taming inflation has set the tone for more anxiousness about the effect of sharply rising prices on consumer confidence and corporate resilience, Streeter said.

German and Dutch five-year bond yields turned positive for the first time since 2018, as traders continued to ramp up their rate-hike bets.

Meanwhile, German industrial orders grew more than expected in December, data showed, with a boost from stronger domestic demand offering cause for optimism.

Danish brewer Carlsberg rose 1.2% after posting quarterly sales above expectations, while Spanish power and gas group Naturgy rose 1.1% after a slight beat on its 2021 earnings guidance.

TomTom plunged 14% after the Dutch navigation and digital mapping firm flagged the prospect of more supply chain constraints in 2022 and reported a bigger-than-expected quarterly core loss.