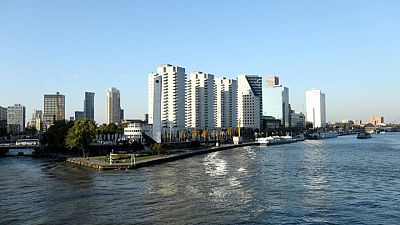 AMSTERDAM -The city of Rotterdam is to put a one-year freeze on the introduction of any more “dark stores” – small distribution centres in the city used as hubs for on-demand grocery services like Getir, Gorillas, Flink, Zapp and others.

The move follows a similar decision by Amsterdam https://www.reuters.com/article/amsterdam-dark-stores-idUSKBN2K129D last week as city residents push back against nuisances caused by the services that promise delivery in 10 minutes or less. These have mushroomed in major cities around Europe since the start of the COVID-19 pandemic.

“Everybody knows them by now: darkened windows, disruption to the flow of traffic in shopping streets, noise from loading, reckless bike delivery people and nuisance from the waiting drivers,” said Rotterdam city council woman Roos Vermeij in a statement.

“There’s nothing wrong in principle with fast delivery, but how it’s being done in practice is bloody irritating.”

The city estimated there were 31 dark stores within its limits, and Rotterdam said on Thursday it has 13 “and growing fast”, all established within the past half year.

A spokesperson for the city said existing stores would not be required to close.

“Since launching in the Netherlands last year, the reception we have received has been overwhelmingly positive,” said Britain’s Zapp in an emailed response.

Turkey’s Getir said in a message that the company was sorry to hear about the Rotterdam decision.

“We have created more than 1,500 fully employed jobs in the Netherlands alone,” a Getir spokesperson said.

“We carefully pick the location of our stores and deliver with 100% electric vehicles, creating no nuisance.”

A spokesperson for Berlin-based Gorillas, which has 2,000 Dutch employees said the company was surprised by the decision and it intends to engage in talks with the cities to resolve complaints.

Germany’s Flink did not immediately respond to request for comment but said after the Amsterdam decision it would work with authorities and noted that its service benefits local entrepreneurs who use its platform as a way to deliver goods.