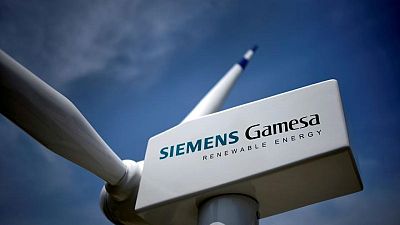 MADRID -Wind turbine maker Siemens Gamesa pledged a “reset” on Thursday, introducing a new chief executive to try to revive its fortunes after a series of losses which have drawn painful scrutiny from parent Siemens Energy.

It confirmed a gloomy outlook for full-year profits.

Wind turbine makers including Danish market leader Vestas have been squeezed by rising costs for raw materials such as steel and to transport parts and products, prompting them to raise prices.

Siemens Gamesa’s woes have been compounded by delays rolling out a new onshore turbine. Its most optimistic prediction is now for a paper-thin core profit margin of 1% this year, but it warned this metric could be as low as negative 4%.

Jochen Eickholt, managing director of German parent Siemens Energy will take over as CEO on March 1, replacing Andreas Nauen, who had been in the job for less than two years.

“The rationale was obvious … not that I like it but I fully understand it,” Nauen told analysts on a conference call. “I’m sad so often I had to present disappointments here.”

People familiar with the matter have told Reuters that the German company has stepped up efforts to take more control, including exploring the possibility of acquiring the 33% stake in Siemens Gamesa it does not already own.

Asked about this possibility by a reporter, Siemens Gamesa Chairman Miguel Angel Lopez said: “We don’t know anything.”

Madrid-listed shares in Siemens Gamesa rose as much as 3% in early trading but fell back into negative territory. Siemens Energy’s shares were down around 0.6% in Frankfurt at 1025 GMT.

He emphasised the difficulties in getting components in the first place: “Ships are not arriving… you are basically chasing your parts.”

Turbine makers are “squashed in the middle” of the wind industry as the final price of wind power has cratered while production costs have climbed, Nauen added.