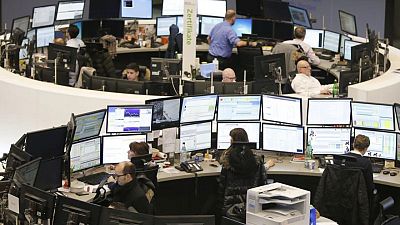 – Euro zone markets, where investors once snapped up scarce bonds at any price, may be at a turning point after demand at government debt sales fell last month versus a year ago.

The first such decline in January since 2015, it marks a shift in supply and demand dynamics for bonds as the European Central Bank prepares to scale back its pandemic bond-buying stimulus scheme.

For the first time since 2019, net debt supply will outstrip ECB buying, which according to UBS, will lead to the biggest annual net supply increase since 2015 when the central bank launched quantitative easing to ward off deflation.

Reuters analysis of the syndicated bond sales — where debt is sold direct to end investors rather than at auction — shows that six euros of demand chased every euro of issuance this January.

That compares with a record eight euros a year ago. January is typically a heavy month for bond sales.

“Investors are not necessarily stepping back altogether but they are scaling back,” said Philip Brown, managing director, sovereign capital markets at Citi, which led deals for France, Ireland, Belgium and Cyprus.

“Investors are generally a little bit more cautious at the moment than they have been at the start of recent years.”

Cyprus’s debt office acknowledged the shift away from “an issuer’s market”.

“We’ve seen it in the pricing demands of investors and the degree of flexibility they showed during the transaction…. We are seeing that they are becoming more price sensitive,” an official said, asking not to be identified.

But it’s a change from a year ago when government debt sales garnered record-setting order books, often packed with inflated orders from hedge funds keen to get hold of bonds they could then sell on to the ECB at a profit.

Such was the frenzy that many debt offices acted to weed out these outsized orders from their sales.

The moves seemed to work. Order books eventually shrank later in 2021. And in January, two bankers involved in the deals said they had noted smaller hedge fund orders as the ECB prepares to buy less bonds.

“As the ECB has less influence on the market there’s going to be less of that day trading,” said Nick Sanders, portfolio manager at AllianceBernstein.

Perhaps more crucially, even some long-term investors are scaling back orders, bankers said.

Bond markets have been saddled with losses over the last month, selling off in the face of surging inflation, upcoming U.S. rate hikes and ECB plans to cut bond purchases.

Record-high euro zone inflation may also force the central bank, which meets on Thursday, to reassess its view that price pressures are as temporary as it expects.

“The takeaway…is that there is less real money participation in new issue order books and that top-tier asset managers want to see a little more of a pricing concession to engage in new issues,” Citi’s Brown said.

Gareth Hill, fund manager at Royal London Asset Management, who participated in most January syndications, said that last year he would be routinely allocated 50-65% of the volume of bonds he had bid for.

Greece illustrated the extent to which the ECB has propped up markets. It will be the only euro zone country whose bonds will be ineligible for ECB purchases after March, when pandemic stimulus ends.

Its 10-year debt sale last month saw demand halve compared to its previous 10-year issuance in June, and its outstanding bonds sold off more sharply than usually seen on the day of issuance.

Another banker who led debt sales, speaking on condition of anonymity, said previously “issuers have been able to price whenever they want, wherever they want, in whatever size they want.”

“We are now beginning to see there is a more balanced market”.