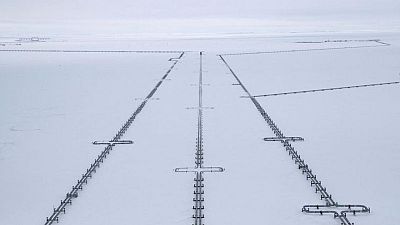 MOSCOW -Natural gas supplies between Poland and Germany via the Russian Yamal-Europe pipeline came to a halt on Wednesday, data from the German network operator Gascade showed, dashing expectations it was about to pump gas west for the first time since December.

Russian gas supplies to Europe have come under scrutiny as thousands of Russian troops have massed near the border of traditional gas transit nation Ukraine, raising fears of an invasion.

The West has accused Russia of deliberately withholding gas and helping to drive prices to record levels, in part to increase pressure on German regulators to approve the new Nord Stream 2 link that would increase Russian gas flows to Europe. Russia has denied the claims.

Gas through the Yamal pipeline, which typically flows west into Germany, has been in reverse mode, flowing east to Poland, since Dec. 21.

It was expected to revert to its normal mode of exporting west after Gazprom booked transit capacity for eight hours, starting from 2100 GMT on Tuesday.

But after about an hour of western flows early on Wednesday, Gascade’s website showed that the pipeline was at a standstill in both directions. Gas prices rose in response.

The initial wesbite data had showed preliminary hourly gas flows of 16,318 kilowatt-hours (kWh) during one hour, compared to 16.2 million kWh booked by Gazprom at a daily auction.

Capacity can be booked via daily auctions. Gazprom has not booked any transit capacity for exporting gas on Thursday via the route.

The Yamal pipeline usually makes up about a sixth of Russia’s annual gas exports to Europe and Turkey.

High prices have discouraged purchases of spot volumes from Russia and buyers have resorted to using stored gas in Europe, meaning storage levels have fallen below their five-year average.

Capacity nominations for supply to Slovakia from Ukraine via the Velke Kapusany border point, another major route for Russian gas deliveries to Europe, eased on Wednesday after hitting their highest point in 2022 on Tuesday.