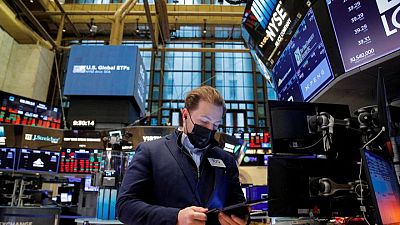 By Yoruk Bahceli and Saikat Chatterjee

LONDON – The U.S. Federal Reserve is on the policy-tightening warpath and global stocks have endured their worst start to the year since 2016, yet corporate credit, with limited exposure to the worst-hit tech companies, is proving remarkably resilient.

While U.S. and European companies’ bonds — those rated investment-grade (IG) as well as riskier ones with junk credit ratings — endured the biggest losses in January since March 2020, their falls were dwarfed by equities, where a global index shed $7 trillion in market value.

Even though U.S. investment-grade credit risk premia rose to a one-year high, they are at levels similar to early February 2020.

Many companies also used the zero-rates period to refinance debt and raise cash; by last September, U.S. and European firms’ debt levels relative to profits had declined to pre-pandemic levels.

And as economies recover and corporate profits grow, default risks recede. By the end of 2021, default rates at junk-grade companies — those with credit ratings below BBB-minus — were at 1.7%, according to Moody’s.

But a major reason for the resilience is perhaps what Deutsche Bank calls a “lack of crossover” between equity and corporate debt indexes. In other words, their constituents are vastly different.

The recent equity sell-off was most damaging for tech shares which are classed as long-duration assets that are vulnerable to higher interest rates.

The majority of top IG constituents are non-tech and therefore less vulnerable to moves in underlying rates.

“If tech leads any U.S. sell-off, credit will be relatively insulated,” Deutsche told clients, adding that correlations of credit spreads to equity moves had declined sharply over the past 12 months.

Within credit, the high-yield index, with near zero tech exposure, has outperformed its IG peer noted Flavio Carpenzano, investment director at Capital Group.

Its duration, representing its sensitivity to moves in underlying interest rates, is around 5 years in the U.S. as high yield debt tends to be shorter-dated, versus around 8-1/2 years on the IG index, according to Refinitiv Datastream.

“It’s an environment where the asset classes most sensitive to interest rates are the ones underperforming so that means tech stocks or (investment-grade) credit, while others such as (high-yield) credit are doing better,” he said.

In Europe too, 20 companies comprise nearly a third of the STOXX 600 but 7% of the IG index, according to Deutsche Bank.

Yet financial conditions, which determine how easy it is to access finance, remain near the loosest on record and markets still expect U.S. interest rates to peak just below 2% in this cycle — the so-called terminal rate.

In fact, borrowing costs for companies in BofA’s U.S. IG index have room to rise another 80 bps before they exceed the index’s par-weighted coupon, according to Refinitiv Datastream.

In other words, companies can still reduce their interest costs by refinancing their debt.

“As long as terminal rate pricing or the Fed’s dot plot doesn’t shift meaningfully higher than 2%, markets will keep a lid on credit and FX volatility,” said John Marley, CEO of forexxtra, a London-based consultancy.