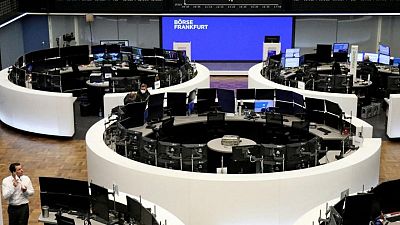 The pan-European STOXX 600 rose 1.3% after January became its worst performing month since October 2020, where concerns over rising interest rates, inflationary pressures, and geopolitical tensions knocked the index down 4%.

Financial stocks rose 2.1%, boosted by UBS after it posted its best annual profit since the global financial crisis, emboldening it to hike share buybacks and set more ambitious profit goals.

Mining stocks were the best performers for the day, up 3.5% tracking gains in copper prices. Expectations of more stimulus in major importer China has buoyed metal prices in recent weeks. [MET/L]

“With no clear catalyst behind the improvement in market sentiment, and no clear change in the fundamental landscape, we believe that (the rebound) may be due to portfolio rebalancing… after a very turbulent month,” said Charalambos Pissouros, head of research at JFD Group.

Focus is now on the European Central Bank’s decision on Thursday, where expectations of a hawkish shift are growing on the back of rising inflation.

Money markets are pricing in an 80% chance of a 25 basis points hike by October and more than a total probability of a 25 bps by December. [IRPR]

“The ECB will likely lift interest rates much slower than the Fed, but we believe they will avoid pressing the hike button this year,” Pissouros added.

Focus is also on the Bank of England, which is widely expected to raise rates on Thursday due to post-pandemic inflationary pressures.

Despite rising inflationary pressures, the STOXX 600 could see brighter prospects over the next few weeks as fourth-quarter earnings offer cause for optimism, analysts say.

A better-than-expected rise in fourth-quarter sales and earnings prompted Germany’s HeidelbergCement to release some results ahead of schedule on Monday, pushing shares of the cement maker up 2.6%.

Automaker Stellantis advanced 2.2%, after three union sources said the company could cut up to 1,400 jobs in France this year as it continued to adapt to a changing industry.