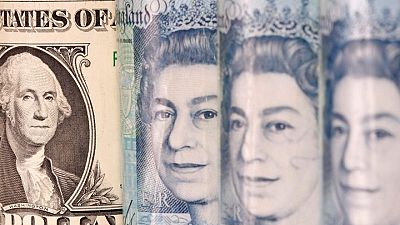 LONDON -Sterling rose for a third straight session to a week-high against a weakening dollar on Tuesday, lifted by a combination of strong economic data and speculation the Bank of England could set the path for further monetary tightening this week.

Investors have now fully priced a 25-basis-point rise in the BoE’s main interest rate to 0.50% on Feb. 3 and economists polled by Reuters also expect that outcome from the meeting.

Amid fears the central bank might be behind the curve when it comes to tackling inflation, there is uncertainty over the pace at which it will raise rates and the level at which they will peak.

At the moment, money markets are pricing the BoE’s main rate to be about 1.25% by the end of the year.

With the 0.5% level expected to be hit on Thursday, traders are also wondering how soon and how fast the bank will start reducing its balance sheet and stop reinvesting maturing gilts.

The pound ended January down 0.58% against the dollar, which had benefited from the ramping up of U.S. rate hike bets.

Commenting on the strength of the British currency during the session, Jeremy Stretch, head of G10 FX strategy at CIBC, said a combination of factors could claim some credit.

Supporting the view that the British economy is still handsomely rebounding from the COVID-19 recession, a survey showed British manufacturing output grew at the fastest pace in six months in January.

Mortgage lender Nationwide also announced that British house prices had their strongest start to any year since 2005 while BoE data showed British lenders approved many more mortgages than expected in December.

The political crisis in Britain over lockdown parties at Downing Street has not had a significant impact on the currency despite news of a police investigation into the matter and opinion polls showing a majority of voters felt Prime Minister Boris Johnson should resign.