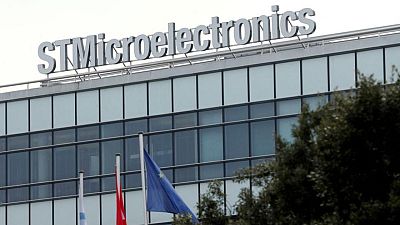 PARIS -French-Italian chipmaker STMicroelectronics plans to double its investments this year to up to $3.6 billion, buoyed by high demand that drove its earnings to beat expectations in the fourth quarter, sending its shares up.

The step up in spending stems from a global chip shortage that has hit manufacturers and fuelled inflation for semi-conductors, which range from low-added value chips in washing machines to sophisticated sensors in cars and smartphones.

The Geneva-based company said on Thursday it planned between $3.4 billion and $3.6 billion in capital spending this year, compared with $1.8 billion in 2021, including building the first production line of a new 300 mm wafer plant in Agrate, Italy.

STMicro, whose biggest clients include electric carmaker Tesla and iPhone maker Apple, expects net revenue this year in a range of $14.8 billion to $15.3 billion, a 20% increase at the top of the range.

Chief Executive Officer Jean-Marc Chery said he expected the chip shortage in the automotive industry to continue and that he saw no signs of any inventory buildup.

Instead, “the challenge … is to have the capability to support the major transformation of the automotive and mobility industry”, Chery said on a call with analysts and journalists.

STMicro shares opened up 2% before extending gains after Chery’s comments. They were trading at 5.9% at 1012 GMT, the best-performing stock on the CAC 40 benchmark index.

The semiconductor bottleneck was still being felt at the start of 2022.

Japanese automaker Toyota said last week it expected to miss its annual nine million vehicle production target because competition for chips meant it didn’t have enough to ramp up car output to offset production lost during the pandemic last year.

STMicro made fourth-quarter earnings per share of $0.82, beating ​analysts’ average estimate of 69 cents per share, according to Refinitiv data.

However, the group sees first-quarter sales around $3.5 billion, down 1.6% from the previous quarter, and gross margin around 45%.